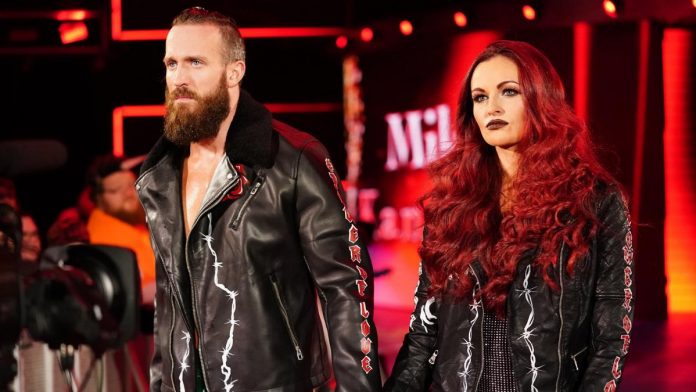 During the latest edition of the “ROHStrong” podcast, Mike Bennett and Maria Kanellis commented on their runs in WWE, when they knew they were doomed, and more. You can check out some highlights from the interview below:

Mike on what went wrong with their gimmick: “So I don’t think a lot of people know this, but that gimmick was dead in the water after the Money in the Bank debut. We did the debut and regardless of how the crowd reacted — which we got a great reaction when we came out — regardless of whatever, that was it. Vince, for whatever reason, didn’t see it and had pretty much all but dropped it from anything. Because the following — not Monday, this was when Smackdown was on Tuesday — We weren’t even on the broadcast. We were part of like a WWE.com [article]. We written into the show and then we got cut. And at that point me and Maria both went, ‘That’s it, we’re done.’ And unfortunately at WWE, that’s how it works. If you’re not constantly on TV, the minute you get cut — and especially for a new gimmick. A debuting gimmick that just debuted two days ago. To not put them on TV immediately after the PPV? We were dead in the water. And then they came up with this idea of like, forcing us to do this [feud] with Sami [Zayn] that was kind of half-assed. No one was really into it. It was really just kind of like, ‘Okay, we’ll give you this storyline to appease you.’ But it was never really going anywhere.”

Maria on WWE bringing them in: “We had come out of Impact with such a good momentum. We had done the wedding that had gotten really great reviews, and a lot of people were excited about the wedding. And you know, we felt really good about everything that was going on in our career. And then WWE called, and we signed with them. And we were told that we were going to be starting right away. They rushed us to get our medical done, they rushed us to get our paperwork signed. They rushed everything. And I even remember talent relations saying, ‘We’ve never rushed someone this quickly before.’ And then we sat. We sat at home from … March until June. We had no contact until June. So like, I already felt like something was fishy. Because if you were that excited about us, why didn’t you bring us out at WrestleMania? Like, we were already down there, you were ready to go. We had done our paperwork, we had done our medical. Everything was done to be on television. So it’s like, ‘Okay, fine. They didn’t want to bring everybody in at the same time. Because not only did they have us, but they also had the Hardys. And they had Drew [McIntyre] and Ethan [Carter III], and Spud [Drake Maverick]. So there was a bunch of us. So I was like, ‘All right. Maybe they’re going to space us out. But then when it took four months, I knew there was an issue. And then after that first night, and then nothing on that Tuesday? I knew we were done. I was so mad that night, that I wanted everybody to hear how I felt. But I was like, ‘You know what? Let’s let this play out and see what happens.’”

Mike on if they ever figured out why WWE soured on them: “So the way that company works is, no one will ever tell you to your face what needs to happen, or why things are going south, or what needs to be fixed. You’ll hear it through the grapevine. You’ll hear little stories here and there, people will say, ‘I heard this from this person.’ I’ll here that from this person. I’ve heard numerous things. I heard, ‘Vince was unimpressed when he saw you, Vince didn’t like how your body looked.’ I’ve heard the gamut of things. I’ve gone in and I’ve talked to Vince, none of these have ever come up in meetings or conversations. So again, no one ever says anything to your face, it’s always just constantly you hear it. And even if you ask people to their face, no one has the courage or the accountability to tell you, ‘This is what’s actually going on.’ And that’s what used to drive me nuts.”