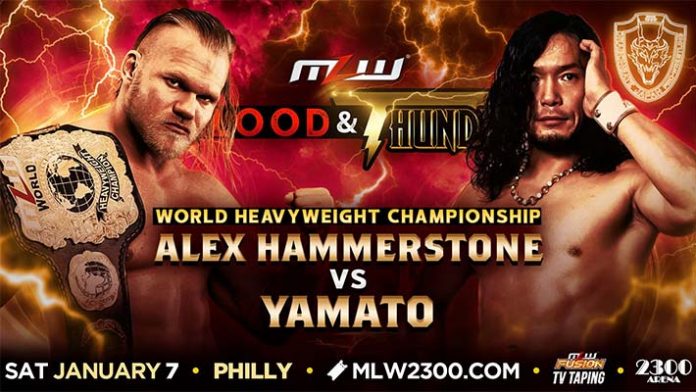 The first 2023 event for Major League Wrestling has its headlining match all set.

The current MLW World Champion Alex Hammerstone will defend his title against DRAGONGATE superstar YAMATO in a huge inter-promotional matchup.

Alex Hammerstone has held the MLW World Heavyweight Title for over a year and this will be his 10th defense of the title.

In addition, indy sensation Billie Starkz will be making her MLW debut at “Blood and Thunder”.

Major League Wrestling and DRAGONGATE are proud to announce YAMATO vs. Alex Hammerstone for the World Heavyweight Championship at at MLW Blood & Thunder on Saturday, January 7 at the 2300 Arena in Philadelphia.

The card is a FUSION TV taping, airing on beIN SPORTS nationwide on cable and dish, streaming on Pro Wrestling TV, and in over 60 countries around the world.

YAMATO will be the first-ever DRAGONGATE wrestler to challenge for the World Heavyweight Championship and would be the first Japanese wrestler to hold MLW’s top title since 2003, when Satoshi Kojima’s championship reign came to an end in MLW.

See history in the making as YAMATO challenges Hammerstone with the World Heavyweight Championship weighing in the balance on Saturday night, January 7th at MLW Blood & Thunder in Philadelphia!
Major League Wrestling returns to Philadelphia’s 2300 Arena on Saturday, January 7. Buy tickets at http://MLW2300.com.