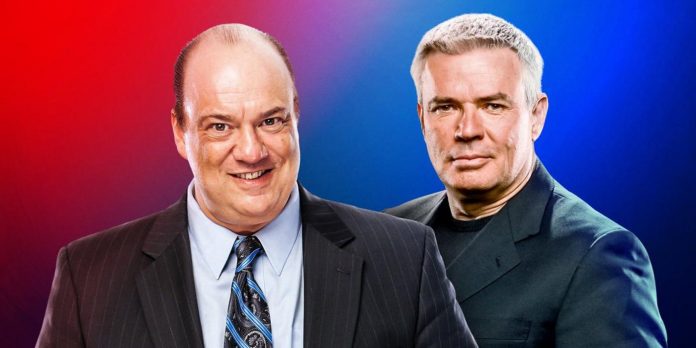 In the blockbuster announcement, WWE said that “Heyman and Bischoff will oversee the creative development of WWE’s flagship programming and ensure integration across all platforms and lines of business. The creation of these roles further establishes WWE’s ability to continuously reinvent its global brand while providing two distinct creative processes for its flagship shows.”

In these newly created positions, Heyman and Bischoff will report directly to WWE Chairman and CEO Vince McMahon, who will continue to lead the company’s overall creative process. Don’t expect changes to be made right away to Raw and SmackDown since the transition will be slow.

According to Ryan Satin of Pro Wrestling Sheet, WWE plans to have Heyman and Bischoff slowly assimilate into their new roles before being given full control to oversee the creative development of Raw and SmackDown LIVE.

Satin asked his sources if ultimate goal of the move is to allow McMahon the ability to step back from the creative process in preparation for the XFL’s relaunch. Sources say the decision had “nothing to do with the XFL” and that only time will tell if McMahon’s ultimate plan is to have the ability to take a step back.

According to PWInsider, WWE has been trying to recruit Heyman as a top member of the creative team since February and finally came to terms recently. He’s been in the inner circle when it comes to the creative process for some time, but was working without an official title. He mostly assisted wrestlers with character development, particularly Brock Lesnar, Ronda Rousey and Alexa Bliss over the past year.

Bischoff came to terms with WWE two weeks ago after the company approached him for the role. Bischoff’s previous work in collaborating with Turner Broadcasting, Spike TV (now known as the Paramount Network) and other networks to produce various television series is a big reason why he landed the role.