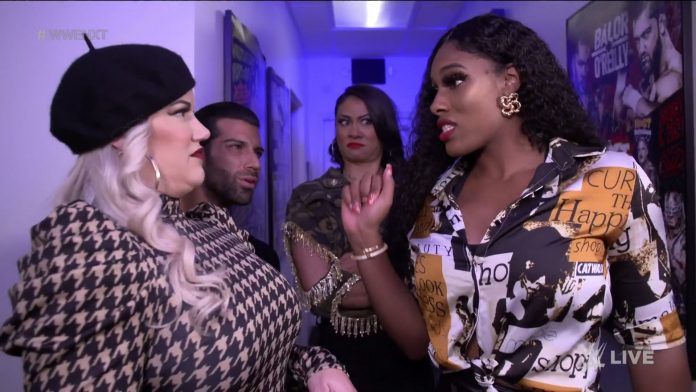 Amari Miller was officially introduced before her loss to Kay Lee Ray but this was not her first appearance with the company. She previously lost to Mercedes Martinez on the June 8 NXT show, and lost to Gigi Dolin no the August 10 NXT show. Miller then defeated Cora Jade on the September 3 WWE 205 Live show, and lost to Valentina Feroz on the September 17 205 Live show. It looks like Miller will be a new character on the NXT 2.0 show moving forward as she cut a pre-match pre-taped promo where she said she’s from Mississippi and is here to show her athleticism and skills. Formerly known as Camron Clay, Camron Connors and Camron Bra’Nae, Miller was signed in the October 2020 Performance Center Class. She has been wrestling for just over 5 years and previously worked for EVOLVE and WWN Live, among others. She also worked the October 25, 2019 SmackDown episode as an enhancement talent, losing to Lacey Evans.

Dante Chen made his debut on tonight’s NXT 2.0 show and was billed as WWE’s first Singaporean Superstar. He defeated Trey Baxter in a fairly quick bout. Chen was previously known as Sean Tan, and also wrestled as Trexxus. He is a former Singapore Pro Wrestling Southeast Asia Champion, who signed with WWE in the same July Performance Center Class that featured just two other talents – Feicheng Wang and Jie Yin.

Speaking of Baxter and Jade, WWE revealed their real-life relationship on tonight’s NXT 2.0 show. After Baxter’s loss to Chen, he was later seen in the locker room, down & out over the match. Jade entered the locker room and encouraged him to cheer up, commenting on how long they’ve been together and how he will always be her hero. Jade then kissed Baxter and walked off, leaving him in a better mood. Jade has worked five NXT and 205 Live matches since January of this year, without a win, but this was her official introduction to the storylines. The former Elayna Black was announced as a member of the February Performance Center Class. She has been with Baxter for a while now.

Andre Chase debuted his new Andre Chase University gimmick this week. Formerly known as Harlem Bravado on the indies, Chase has been wrestling since graduating from the ROH Academy in 2008. He signed with WWE as a member of February’s loaded Performance Center Class. Chase actually made his debut back in June, defeating Guru Raaj in a Breakout Tournament qualifier. He went on to lose to Odyssey Jones in the first round of the tournament, and lost to LA Knight on NXT TV a few weeks later. He has worked 4 matches on WWE 205 Live since then, losing all. Chase continued his feud with Jones on tonight’s show. His Andre Chase University segment featured a class room setting with Chase going over why Jones lost to Carmelo Hayes in the Breakout Tournament. A student named Steve pointed to how Jones defeated Chase, which led to Chase snapping and kicking the man out of the class. Chase later tried to distract Jones during his Handicap Match win over two enhancement talents, but Jones still got the win. Chase entered the ring with a steel chair after the match but Jones blocked it, which broke the chair. Chase then retreated as Jones looked on.

Joe Gacy also debuted his new gimmick on tonight’s NXT 2.0 show. Gacy won a Breakout Tournament qualifier over Desmond Dejournette back in June, but lost to Trey Baxter in the first round. He has worked a handful of NXT and 205 Live matches since then. Tonight’s NXT show saw Gacy come out and cut a promo on how the ring is a safe space, and NXT is home to the smallest microaggressions to the biggest grudges, and the ring is where differences are settled. He went on about how he brings a mindset of conflict resolution, and doesn’t need to use male privilege to get what he wants as he understands that life isn’t fair, but he believes we can achieve unity and tolerance for all, and he is the man that will show us how to achieve peace in the safe space that is the ring. He then lost to Cameron Grimes. Gacy worked the match while smiling at times, and offered his hand for a post-match shake. Grimes shook his hand but Gacy pulled him in for a hug and then left all smiles.

Tonight’s NXT 2.0 show also featured a brief segment with Xyon Quinn, also known as former rugby star Daniel Vidot. Quinn has been working several main roster dark matches this summer. Tonight’s segment saw Quinn walk two female wrestlers into the building until a male wrestler tried to jump in front of them and enter the venue while Quinn was holding the door for the ladies. Quinn ended up dropping the unknown male wrestler and following the women into the building. The blonde woman was Jessica Woynilko, a 21 year old gymnast, bodybuilder and CrossFit athlete signed back in August. The brunette is Jennifer Michell Cantu Iglesias, now going by Yulisa León. Yulisa is a second generation wrestler and bodybuilder from Mexico, who is the daughter of Mexican wrestler Bronco (Ulises Cantu Gutierrez), who often worked for CMLL. She signed with WWE in April.

Lash Legend made her debut in a backstage segment on tonight’s show. After NXT Women’s Champion Raquel Gonzalez confronted Franky Monet, Jessi Kamea and Robert Stone to confirm her title defense against Monet for next Tuesday, Lash interrupted Monet and announced that she will be debuting her talk show next week, Lashing Out with Lash Legend. Legend previously played in the WNBA for the Seattle Storm, and signed with WWE as a part of last December’s Performance Center Class. She appeared in a NXT TV segment with Grimes this past February. Legend played college basketball at Mississippi State and Texas A&M before going pro in the 2019 WNBA Draft.

Finally, Persia Pirotta was officially introduced tonight. Formerly known as Steph De Lander, Persia signed with WWE this past March after working the indies in Australia. Persia appeared in the recent bachelorette party segment for Indi Hartwell, and will continue teaming with Indi when she returns from her honeymoon with Dexter Lumis. Persia interrupted a backstage segment with NXT Women’s Tag Team Champions Io Shirai and Zoey Stark on tonight’s show and warned them that she and Indi will want a title shot when Indi is back.

Stay tuned for more from NXT 2.0. Below are related clips and photos for the new Superstars covered above:

"I come from a place of conflict resolution where I don't need to use my male privilege to get what I want." – @JoeGacy #WWENXT pic.twitter.com/cLW1rzFffj

.@JoeGacy has no time for toxic masculinity.

It's not a loss; it's a teachable moment as Gacy hugs the winner of this match, @CGrimesWWE. #WWENXT pic.twitter.com/fb436PO2ck

This ring is a safe space. @JoeGacy is simply here for conflict resolution with @CGrimesWWE and is handing out both micro and macro aggressions. #WWENXT pic.twitter.com/4jlcdlVYIu