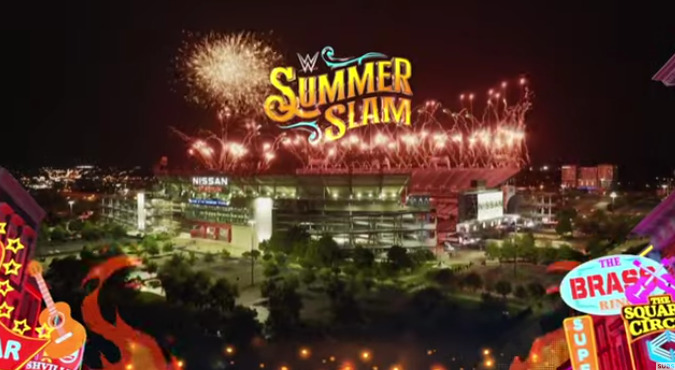 “The Biggest Party of the Summer” is just days away.

Before the WWE Universe invades downtown Nashville, Tennessee via Nissan Stadium on Saturday night, July 30, 2022 for the 35th annual WWE SummerSlam pay-per-view event, WWE is offering a special sneak peek at the sights inside the venue that can fit up to 70,000 fans before the big special event this weekend.

On Thursday, WWE released a video via their official YouTube channel dubbed, “Must-see drone footage sets stage for SummerSlam in Nashville,” which features a look at a drone flying around inside the venue and showing off the massive stadium that will play host to one of the big-four annual WWE spectacles, which dates back to the inaugural installment back in 1988.

The official description for the video, which you can watch in its’ entirety via the YouTube player embedded below courtesy of WWE’s official channel, reads as follows:

Feel the excitement of downtown Nashville as the WWE Universe takes over Nissan Stadium for SummerSlam this Saturday at 8/7 C.

Watch the complete WWE SummerSlam 2022 drone footage from inside Nissan Stadium in Nashville, TN. ahead of Saturday night’s pay-per-view via the video embedded below.

Make sure to join us here at PWMania.com on 7/30 for the fastest and most-detailed live WWE SummerSlam 2022 results coverage from Nashville, TN.