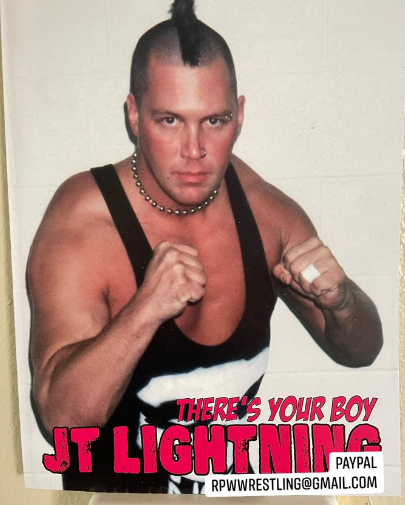 “Make sure nobody ever forgets me”

Absolute Intense Wrestling promoter, John Thorne recounted a text message he received from longtime Cleveland veteran, JT Lightning in 2011, during a podcast prior to the J-Lit tournament, a standout event dedicated to JT’s memory in 2018.

Known as JT inside the ring ropes, the real-life James Haase spent nearly half of his life involved in the professional wrestling industry, landing in the sport in 1992, and worked in nearly every facet of the business over the next two decades. A wrestler that zigzagged all across the mid-west, a promoter of cards for several years, and a trainer of some of the sport’s most accomplished stars, JT’s body of work impacted many along the way. Considered unanimously as the godfather of the Cleveland scene, Lightning’s Cleveland All Pro Wrestling organization, launched in the early-90s, provided a foundation for independent wrestling in the region, as well as provide a valuable platform for aspiring hopefuls to make a name for themselves.

Tragically, James Haase’s life and career was cut short, as he was diagnosed with throat cancer in 2010 and passed away the following year at the age of just 41.

One of the individuals that Haase had a profound effect on was Bobby Piskor, a veteran in his own right that will celebrate his twentieth anniversary in the sport later this month. Piskor, known as the best referee in the Pittsburgh area, Bobby Williams when he wears the stripes or as the villainous Robert Parker Williams when he laced up the boots, added another title to his resume in recent years, author. With almost half a dozen titles under his belt, Piskor has used the writing process as a form of personal growth, documentation of his own career, and as a way to honor the legacy of those that made his professional wrestling journey possible.

Now, JT Lightning’s legacy will be immortalized in print though Piskor’s latest release, “There’s your boy:JT Lightning,” a book with memories from his peers, friends, and family.

As Bobby sipped on a freshly-brewed cup of coffee and clattered the keyboard, he penned portions of the pages that would eventually materialize into the book, and he was reminded of his longtime bond with a late wrestling promoter, a bond shared over a passion for the squared circle. He was reminded of the year 2003, when he jumped into a car before he even graduated high school to take a trip to a Cleveland All Pro event with a few Pittsburgh athletes that were scheduled for the card. By chance, JT had a last-minute cancellation and needed a referee. Even at just 17, Bobby knew the golden rule to always have your gear so he was penciled in as the official for the evening, which led to an extensive friendship between the two.

“He knew my passion and love for professional wrestling that he took me under his wing and taught me so much. I learned how to work as a heel. psychology was real big in his class. I also learned how to run a promotion. I worked for CAPW for 7 years. Much like my project with the Devil Bhudakahn “ Man behind the mask,” this is written through multiple people’s stories. I have given everyone the question, ‘what kind of impact did JT make on you both professionally and personally?’ The writing process brought up a lot of great memories. I once considered moving to Cleveland because of all the work I did for JT. He was one of my mentors. I never had a bad experience with JT, both in the ring and outside. We never had a cross word with each other. I knew what he was looking for in each show. I helped with booking, booking talent, did the graphics, and I ran the website,” Piskor explained.

Haase ran his business in a serious manner, professional wrestling was based on the entertainment and the enjoyment of the audience, but there was a bottom line to business ventures, and he ran his wrestling group as serious as any other business project. Still, his passion and dedication for the industry shined through and he took the time to enjoy the ride. Often clad in a Ramones t-shirt with a collection of punk rock CDs to provide the soundtrack on road trips, JT’s trademark saying of “scope this” greeted many of his co-workers before the opening bell on any given night.

“JT was as straight to the point as anyone could ever be. He never sugar coated anything, and was considered a straight shooter. As serious as he was about the business, JT was always willing to have a laugh, sometimes at the reigns of a rib. As that old saying goes, if he busted your chops, he liked you,” Bobby recalled.

Working so close-knit with JT for the better part of a decade, Bobby learned many aspects of the business beyond just the product that ends up in the ring, and also learned several important lessons about life through their friendship. As a family man himself with a young daughter, Lucy, Bobby values those life lessons even more in retrospect.

“JT was a huge influence on my career because he took a naive 17-year old-kid, and taught him how to be confident in the ring. He taught me how to stand up for myself and not get walked all over. He taught me more importantly how to be a family man. We talked every day about wrestling, but we also talked about life and family. JT loved talking about his family,” Piskor added.

Produced with the full support of JT’s wife, Heather, the publication features a piece written by his son, Mike as well as many of those that knew him best. In many respects, the pages tell the story of not only the career of JT Lightning, but also a major piece of the history of the Cleveland independent wrestling scene. More than anything, the biggest takeaway as readers turn the pages will be the lasting impression that JT made on those that he helped throughout his time in the wrestling business.

“Everyone looked up to him and respected him. He was no-nonsense, and shot from the hip. If you worked on one of his cards, you knew that you made it because he made you work for that opportunity. He would put you in the ring with the best in the world, because at that point, CAPW was bringing in all the top stars from WWE, TNA, and ROH,” Bobby said.

Considering the level of detail and work that went into Piskor’s publication, as well as the J-Lit tournament, one of the biggest events of the independent scene, in his honor, it’s very clear that nobody will forget the legacy of JT Lightning or his many contributions to the industry.