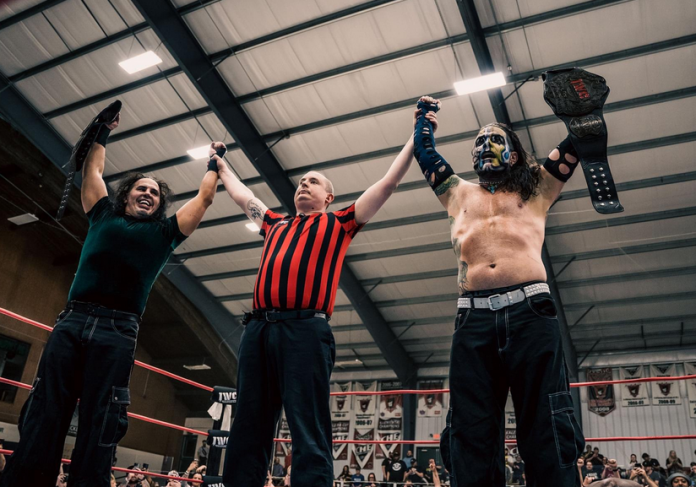 You’ve seen those moments on social media, someone puts a photo online of when they were just a dreamer next to a picture of their accomplishment of that goal. It’s one of the few redeeming qualities of the often jaded social media society that exist today, we get the chance to see things go full circle.

For one longtime Pittsburgh pro wrestling veteran, he will see things go full circle for his career around the squared circle, a journey that saw him grow up in the sport over the past two decades.

Bobby Piskor, known affectionately as “Potter” among his friends for his striking resemblance to the JK Rowling character, has spent the majority of his life in the pro wrestling business in some form or fashion. When he was just 15, he began designing websites for his mentor and eventual trainer, the late James Fawcett, known in the ring as Devil Bhudakahn. Bobby wasn’t even old enough to drive and technically not old enough to be involved at the events, but he did ring crew for the earliest International Wrestling Cartel events as he tagged along with his mentor. The IWC, founded in 2001 by grizzled veteran and local radio personality, Bubba The Bulldog, was promoted successfully for many years by one of the godfathers of the steel city indy scene, Norm Connors. Over the years, ownership changed and eventually landed in the hands of Justin Plummer since 2014. IWC is one of the biggest independent organizations on the east coast, recently hosting The Hardys in a tag team title match in front on a jam-packed crowd at the Rostraver Ice Gardens.

For over 20 years I have dedicated myself to professional wrestling. I have worn many hats in those years. The one hat that I have not worn has been a trainer. pic.twitter.com/qQmRhJdrCa


Before IWC streamed on FITE TV for a potentially worldwide audience, it started the same way all local outfits start, small venues with a core group of dedicated fans. When the previously mentioned Fawcett worked those events in places like the Emerald Room, a building forgotten by most except those that were there, Bobby hauled in the canvas and set up chairs. Just to have a foot in the door was a thrill for the youngster, and the decision to pursue professional wrestling shaped the direction of his life.


Over these past twenty years, Bobby has worn almost every hat you can in the industry, becoming a true jack-of-all-trades. A referee, wrestler, author, graphic designer, booker, and countless other tasks all decorated his wrestling resume.

Piskor has worked every part of the industry spectrum, standing in the same ring with legends like Chris Jericho and The Hardys, as well as working with a rookie early in their career.

There isn’t much Bobby hasn’t done in these past 21 years, and he looks to add one more title to his career very soon, as he’s scheduled to become the head trainer for the IWC’s training center, the Iron City Wrestling Academy. The fingerprints of the ICWA are all over the current landscape of the industry. Before she electrified the hometown crowd with a few Pittsburgh Steelers by her side, Dr. Britt Baker learned the ropes under the IWC banner. Before he conducted the power bomb symphony on TBS, Wardlow honed his crafted in an IWC ring. Elias held the IWC heavyweight championship before he held a guitar on pay-per-view. Even NXT’s Troy Donovan broke into the sport with IWC.

Piskor knows the level of responsibility he has as the trainer of a training center with such a track record and looks to use his knowledge as not only an in-ring competitor, but the years he spent learning every facet of the industry.

“It has been no secret for the last several years I have been helping out tremendously behind the scenes at IWC. IWC was looking to fill a position to train the upcoming class. I put my name in the hat for it and my name was picked. I think a lot of the fundamentals are lacking in professional wrestling today. I want to spend a good bit of my time with the psychological aspects of pro wrestling, and the attention to detail that I have. Sure the moves are important, but its the why we do things that’s more important,” Piskor explained.

With his track record and well-established reputation, pundits of the region have already expressed their confidence in Piskor for this new role.

“This is a man that has worn many hats in the wrestling business over the past 21 years; probably every one there is to wear. As a long time and well-traveled referee he has had opportunities to be a fly on the wall learning indirectly from some of the best our business has to offer. You can tell that he’s carried those lessons into his in-ring work once he started wrestling full-time. With such a well rounded resume both in and out of the ring he brings so much more to a trainer role than just someone with in-ring experience that can teach the fundamentals. I fully expect that his students are going to have a great education on all of the moving pieces of our business and have a better understanding of them than most that are just starting out,” said Dash Bennett, a semi-retired pro that spent the bulk of his wrestling career on many of the same cards as Bobby.

After working with the IWC on a sporadic basis for the majority of the early 2000s, Bobby became a regular for the group in 2015, working extensively with the organization beyond just when the bright lights illuminate the canvas for showtime. Particularly, those past seven years gave him a PHD-level education on every aspect of the business. Now, he gets a chance to apply that knowledge to the hopefuls that walk through the doors of the Iron City Training Academy. Bobby gets the opportunity to help others live their dream of being a pro wrestler the same way that Devil Bhudakahn assisted him all those years ago when Piskor was thrilled to assemble an IWC ring at the Emerald Room.

“My goal is to give back to the this business as much as I have gotten from it. I want these students to learn all aspects of pro wrestling. There are more responsibilities than just wrestling on a card,” Bobby concluded.