– Next Thursday’s Bound For Glory go-home edition of Impact Wrestling will feature FinJuice vs. Bullet Club members Hikuleo and Chris Bey with the winners going on to the pay-per-view to challenge Impact World Tag Team Champions The Good Brothers.

Mickie James will also be in action against Savannah Evans on next week’s Impact. James vs. Evans was made after Knockouts Champion Deonna Purrazzo named Evans as James’ “Pick Your Poison” opponent. James previously picked Masha Slamovich as Purrazzo’s opponent, and Purrazzo retained over her at Knockouts Knockdown last weekend. James will challenge Purrazzo at Bound For Glory. This will be James’ first Impact match in 6 years. Her last Impact bout came in June 2015 as she and husband Nick Aldis defeated James Storm and Serena Deeb.

Stay tuned for more on next week’s go-home Impact.

Finally, we now know the final two qualifying matches for the Impact Digital Media Title Six-Way on the Bound For Glory pre-show. Chelsea Green vs. Madison Rayne will air next Tuesday, while Tenille Dashwood vs. Alisha Edwards will air next Wednesday via Impact Plus and YouTube. The winners of these bouts will join Fallah Bahh, Jordynne Grace, John Skyler and Crazzy Steve in the Six-Way at the pay-per-view.

20-Man Call Your Shot Gauntlet Match
Brian Myers vs. Rich Swann vs. Moose vs. Eddie Edwards vs. W. Morrissey vs. Chris Sabin vs. 14 wrestlers TBA
Winner receives a trophy and a contract for a title match of their choosing within one year. W. Morrissey will enter last, Chris Sabin will enter first.

Heath and Rhino vs. Violent By Design
If Rhino rejects Heath’s offer, he will have to face VBD in a Handicap Match. 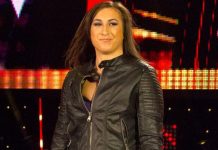