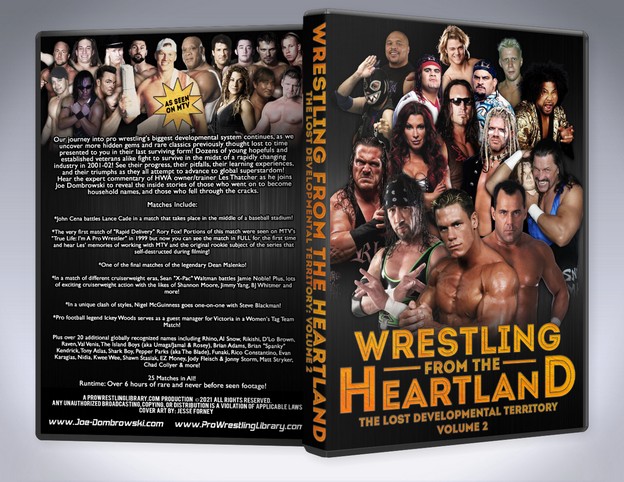 It’s often said in the professional wrestling industry that even during the midst of the surges in popularity of the industry, there will always be an emphasis on the development of talent for the future because that’s how the sports entertainment genre, which has been a staple of American entertainment for decades, remains a part of the sports landscape.

With the addition of NXT, the once-niche product, to the main stream WWE TV line-up the development of the stars of the future is spotlighted as one of the continuous conversations of social media. Before that, Florida Championship Wrestling, a nod to legendary promoter, Eddie Graham’s legacy in the state, put the pieces together for WWE’s in-house developmental program that eventually evolved to the NXT brand that we see on the USA network today.

Before TV contracts put the stars of the future on network television, the concept of a developmental league was to get prospects exposure as a way to get seasoning in front of live audiences, but to keep it under the radar enough that any mistakes wouldn’t taint their first impression on a national audience. For example, it’s well-known that the Louisville-based Ohio Valley Wrestling was used as the minor league operation for World Wrestling Entertainment for most of the first decade of the 2000s, with its reputation known as the place that an all-star cast of future main eventers learned their craft. Names like Brock Lesnar, John Cena, and Randy Orton were just a few of the famous alumni that went on to make names for themselves.

Before that the USWA, a group that was established from the ashes of the Memphis territory of the 80s, and even Puerto Rico served as places that an aspiring talent would be sent to get valuable reps inside the ropes.

However, there was an organization that even in the modern age of the internet and all the resources that go along with it, is still one of the best kept secrets of a developmental era of the business.

The Heartland Wrestling Association, a league that was based out of Cincinnati, Ohio, was launched in 1996 and ran for nearly two decades before it ceased operations in 2015. During that time, the promotion played a pivotal developmental role for World Championship Wrestling in the 90s, and later the WWE in the early-2000s. Among those that learned the ropes in an HWA ring were former Ring Of Honor and current NXT UK announcer Nigel McGuinness, accomplished veteran, BJ Whitmer, and several others that made an impact on the national scene.

Even more of a hidden gem than the HWA is it’s founder, the legendary Les Thatcher, who has made continuous contributions to the professional wrestling industry in some form or fashion for several decades. As a wrestler, announcer, promoter, or trainer, there’s very few roles that Thatcher hasn’t taken during the course of his stellar career.

“I don’t think he gets the credit he deserves, maybe because his name hasn’t been plastered all over mainstream wrestling TV as much as others, but he’s worn every hat and become one of the most respected trainers and minds over 60 years in this business. He has a story to tell that could fill an entire encyclopedia set,” said Joe Dombrowski, a play-by-play announcer and video producer that has spent his entire adult like involved in the industry since he started calling cards in his hometown of Pittsburgh before he branched out to several other states and even other countries.

Ironically, Dombrowski has known Thatcher for almost as long as his tenure as an announcer when he started calling the action in 2003. Known as a true student of the game with a deep dedication toward the extensive history of the business, a young Dombrowski sent two dozen e-mails to notable minds of the industry, looking for feedback on his work. Les was one of four that responded and the two have stayed in touch ever since. During a rather typical discussion, the seed of an idea was planted and would later become one of Joe’s trademark video releases.

“I think it was just an ordinary conversation with Les one day, it had to have been around 7 or 8 years ago by now, where he had mentioned he still had the rights to every HWA event he ran before he sold the company, which included his time as a WWF developmental territory. It really caught my attention because OVW TV from that era is out there if you know where to find it, so is FCW, and of course NXT, but no one really talks about Heartland as much and all the amazing talent they helped produce in Cincinnati. Especially too considering Les had house show tapes which were never sold anywhere beyond the merchandise tables at his live events, and some were even never sold at all and just used for internal review, so I was literally uncovering things that no one had ever seen unless you were in the building that day,” Dombrowski explained.

That seed of an idea would eventually be realized as his recently released “Wrestling From The Heartland” series, currently consisting of two volumes that are jam-packed with some of the rarest footage possible. As much as the stellar compilations deliver for diehard fans, the process to produce them wasn’t easy, and Dombrowski found himself in front of his computer screen for many late-night viewing sessions to unearth the gems hidden in Les’ video library. Before that, Joe quite literally had to unearth the VHS tapes of these events that were stored at Thatcher’s home.

“Somewhere around 2015 or so, I was working an event in Ft. Wayne, Indiana and I decided to take a detour on my drive home to stop and visit Les and my friend Jimmy Yang, who both lived in Cincinnati at the time, and that’s when I had the chance to look at Les’ tapes for the first time. There were probably at least 150 tapes in Les’ storage. I’m not saying I watched every single second of every single match, but I went through every single tape start-to-finish, play or fast-forward, looking for future stars that have mainstream appeal today, globally known vets having classics that slipped through the cracks of history, hidden gems that would captivate audiences, and a blend of different styles, eras, and talents. Some of the footage is crude or primitive but I think anyone around long enough to remember tape trading will appreciate that authenticity of the era,” Joe commented

The depth of the project was a deep dive for even Dombrowski, as he transferred VHS footage to DVD and digital platforms, uncovering some gems that only the HWA could’ve offered at a pivotal time of the industry. A pair of bouts from the formative years of John Cena’s career, one of the final matches of Dean Malenko’s career, and never-before-seen contests were just some of the action the veteran play-by-play announcer found during the course of this production. Of course, he had to bring Les’ insight onto the presentation so while Dombrowski narrates the bouts, Thatcher adds incredible details for the stories behind the action.

“Working with Les was amazing. Peering into his brain was like opening a gold mine in itself. Usually when I call matches, the focus is always on the story and personalities unfolding in the ring. This time, while I didn’t want to ignore the match, I knew the real story to tell was what these guys went through when the cameras were off – training every day, hoping to get a main roster dark match or call-up, the dreams coming true, and the ones that unfortunately didn’t come to be. So I had fun just picking Les’ brain and getting his perspective on working with talent as well as the WWF/E office, and you hear a lot of stories that have never been mentioned publicly before,” Dombrowski said.

“Wrestling From The Heartland” is just the latest production from Dombrowski, who looks to carve a niche for himself in an often crowded market of digital platforms and streaming services. It’s a challenge, similar to those of any small business model, but it’s a challenge that Dombrowski accepted.

“It’s an overwhelming challenge in today’s market because you’re literally competing with everything from streaming services to social media feeds to video games to traditional TV. There’s no one today that can say there isn’t enough content to consume, wrestling or otherwise. To me, the challenge has always been to make my projects something you can’t find anywhere else. In other words, something that doesn’t have a limited shelf life,” Dombrowski explained.

So, in an era when thousands of hours of professional wrestling content is available with just a push of a button and more options on how to view the content than any other time in history, The “Wrestling from the Heartland” series gives fans the chance to watch never-before-seen footage with the insight of Les Thatcher during the matches.

For more information on Wrestling from the Heartland or any other of Joe’s productions, you can go to Joe-Dombrowski.com and ProWrestlingLibrary.com