Here are some news and notes from this week’s WWE RAW:

* PWInsider.com reports that Vince McMahon, Triple H, and Kevin Dunn were not backstage during the day but McMahon showed up shortly before RAW went on the air.

* The reverend from the Bobby Lashley and Lana wedding was New York City-based actor Rick Malone. On Facebook, Malone called it “the craziest 20 minutes of my professional acting career!” Lana’s “first husband” was played by EJ Risk, an indy wrestler from Create-A-Pro Wrestling in New York. Lashley’s “first wife” was played by Karissa Rivera, an indy wrestler that has been enhancement talent for WWE on Smackdown and NXT.

* In less than 24 hours, the Bobby Lashley and Lana wedding already has over 2 million views on YouTube. Randy Orton’s “injury” segment is also doing well with over 1.4 million views as of Tuesday afternoon. 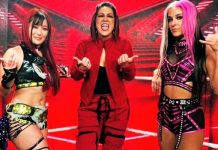