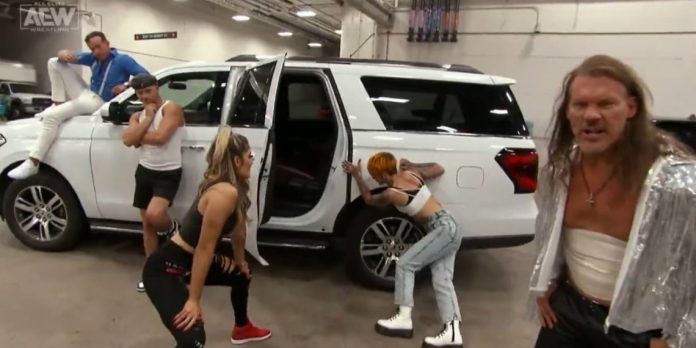 In a backstage segment from this week’s AEW Dynamite, Chris Jericho gave Tay Conti the go-ahead to attack Ruby Soho and break her arm.

As seen in the video down below, Tony Schiavone was interviewing Eddie Kingston in the ring while he was expressing his desire to still taste Chris Jericho’s blood. The Jericho Appreciation Society (Conti, Jake Hager, Daniel Garcia, Angelo Parker, and Matt Menard) then appeared on the big screen with Jericho. Soho was being forced to stand near an open back door on a white SUV.

Kingston was warned by Jericho to be mindful of his crazy behavior. Conti followed his instructions and slammed the door on Soho’s arm. Conti went down and held her arm, despite the awkwardness of the situation. Then Jericho warned Kingston to be careful or he might experience this. The JAS then left the area as Parker rubbed his foot on Soho and Conti kicked her. Two officials arrived to request medical assistance for Soho as the segment came to a close.

In an update, Jericho was not at AEW Dynamite because he is on tour in the United Kingdom for his “Jericho Chronicles.” Below is a recent Instagram photo that he shared from the tour’s final night in London, England.

Filming for the Soho and The JAS segment took place last week at the Little Caesars Arena in Detroit, where AEW Dynamite’s Blood & Guts edition took place. According to Fightful Select, Jericho will return on Wednesday for Fyter Fest, but it is unknown what he will be doing just yet.

Here is the video from Dynamite, along with Jericho’s one-man show photo from The Grand in London:

.@IAmJericho sends a devastating message to @MadKing1981, as Kingston started to address the crowd here in Rochester, NY. #AEWDynamite is LIVE on @TBSNetwork! pic.twitter.com/XU3HlHCpT8