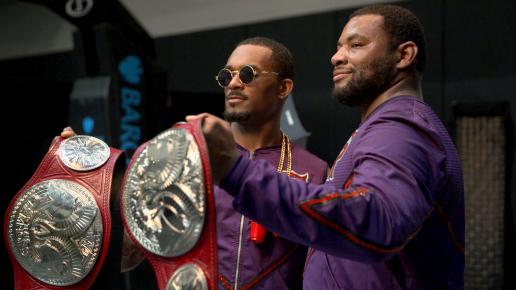 There was a spot during the RAW six-man where Montez Ford flew out of the ring and took a hard landing, which was a hot topic on social media coming out of the match. Some fans blamed the newcomer Theory for not catching Ford or being in the right spot, but Bryan Alvarez noted on Wrestling Observer Live that Ford’s flip dive wasn’t planned.

The botched move was reportedly the result of a miscommunication among those involved, and it’s interesting that this happened while they were taping a match, and it was left in without a re-shoot. Alvarez reported that when Ford hit the ropes, Rollins was supposed to trip him. Rollins was a bit late getting into place, but not too late. It was speculated that Ford may have realized Rollins wasn’t in place, and didn’t think Rollins could get to him in time, so he improvised and did the flip dive anyway.

Ford still ran, and Rollins did get his foot, but Ford then performed the un-planned flip dive over the top rope to the floor. Theory reportedly did not know the dive was coming, and took the bump anyway. Alvarez added that the spot was supposed to see Rollins trip Ford, but Ford did the dive that he wasn’t supposed to do anyway, and that apparently was the end of it.

This spot happened at the end of the match, so it wasn’t hard for any of the participants to finish the bout, but we’ve heard nothing about an injury to Ford or Theory.