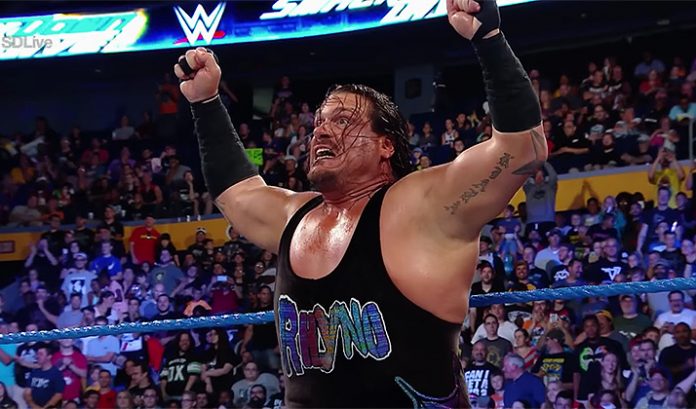 — Rhyno is officially back on the Monday Night Raw roster.

On the December 3 episode of Raw, then-Acting Raw General Manager Baron Corbin created a match between Rhyno and Slater, where the loser would be fired from Raw. Rhyno lost the match and was subsequently forced to leave the brand. However, after Corbin was removed from power, he returned to aid Slater against an attack from Jinder Mahal and The Singh Brothers on the December 24 episode of Raw, disguised as Santa Claus. On the New Years’ Eve edition of Raw, Rhyno and Slater lost to Mahal and The Singh Brothers.

Following the show, Rhyno again disappeared from WWE television. Although, he wrestled a handful of matches at WWE house shows the next two months, with the most recent taking place on February 24. He returned to action last Sunday on the WrestleMania 35 Kickoff, competing in the sixth annual Andre the Giant Memorial Battle Royal.

After Corbin fired Rhyno from Raw, WWE.com moved his profile to the Alumni section. It got added back to the Raw roster last week, thus ending any confusion on his WWE status.

— Follow NXT Superstars Kairi Sane and Candice LeRae on their journey to WrestleMania 35 and watch their reaction as their coaches tell them they’ll compete in the WrestleMania Women’s Battle Royal.