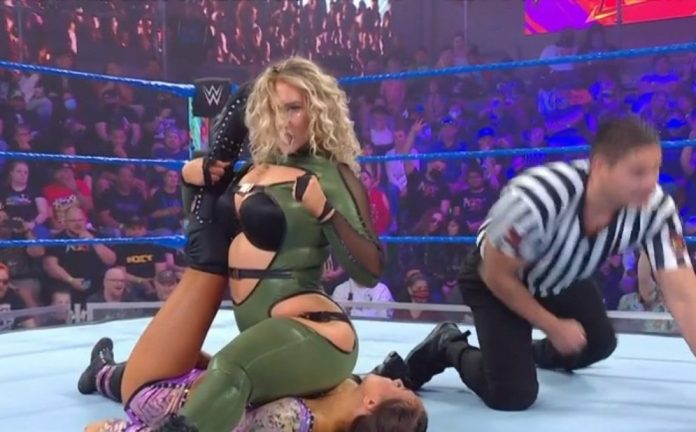 WWE NXT standout star Nikkita Lyons recently appeared on the Out of Character with Ryan Satin podcast and spoke about how she got into wrestling. Here are the highlights:

When she first started watching wrestling: “I want to say probably, like preteen years. When I was flipping through channels, I landed on WWE. I remember the moment. We were watching TV together (with her mom). I want to say I was 12 or 13. We started watching a women’s match. I was like, ‘Maybe one day I could do that’. But at the time, I didn’t realize that I would actually end up falling in love with it. I saw it, and I was like, ‘Oh, that’s really cool.’ I had no idea how to get into it. I was like, ‘This is awesome. It’s sports entertainment.’ But I was 12 or 13. I was going here and there and trying to figure out who I was.”

How she got started in wrestling: “My mom actually came across the audition for WOW. That’s how I got into it. I went to the first audition. It was in person meeting the producers and the coaches. It went really well. The callback was in the ring. That was my very first time taking rolls and bumps and doing all of that. I was like, ‘This is freaking cool.’ I loved it. That’s really when I fell in love with it. Then I want to say it was 2019, I was actually approached by a recruiter that ironically ran into my dad at one of the WOW shows. He was like, ‘Hey, I’m recruiting for WWE. She’s really good.’ My dad was like, ‘That’s my daughter.’ So it’s just funny how that works. But at the time, I felt like I was just not ready. Like, honestly, when I was 19 years old, I was nervous and just getting into this, like, I have no idea really what I’m doing fully.”