El Desperado & Master Wato started this match off with them trading chops before they brawled on the floor. Suzuki Gun began taking turns working over Wato. Wato hit a tilt a whirl backbreaker on Douki.

Clark Connors made the hot tag and hit a spear in the corner on Douki. Douki fires back with a DDT. Kosei Fujita entered for the first time and traded blows with Yoshinobu Kanemaru and Fujita applied a Boston Crab while Connors hits a Pounce on Douki. Kanemaru locks Fujita in the Figure 4 to get the submission win.

Hiromu Takahashi & Taiji Ishimori charged at each other at the bell then Bullet Club all began working over Takahashi. Takahashi hits a Falcon Arrow on Ishimori and he finally makes the hot tag to Titan.

Takagi hits a DDT for a near fall. Gedo got some brass knuckles, but Takagi avoided being hit. Los Ingobnrables De Japon hits a clothesline in the corner on Gedo before Takagi connects with Pumping Bomber to get the win for LIJ.

Gabriel Kidd & Chase Owens kicks this match off with basic standing reversals, and Bullet Club works him over early on. Kidd finally hit a superkick on Bad Luck Fale then he dove for the hot tag but Owens pulls Alex Coughlin off the ring apron. Fale continued to beat down Kidd in the ring.

Coughlin finally made the hot tag, but he couldn’t pick up Fale for a body slam. Fale responded with a shoulder tackle and an elbow drop for a near fall. Fale clotheslines Kidd while Owens hit a German suplex then Coughlin got Fale up for the body slam. Owens drills Coughlin to the mat with the Package Piledriver to score the victory.

Suzuki Gun attacks United Empire as they entered the ring, and they all brawled on the floor to start the match. In the ring United Empire works over Minoru Suzuki in their corner. Suzuki applied a cross armbreaker in the ropes on Aaron Henare.

Lance Archer tagged in and stood on Henare, and they began working him over. Archer dropped him with a forearm shot. Great O Khan got in and he drops Suzuki with a shoulder tackle. They began trading forearm shots with O Khan putting his arms behind his back allowing Suzuki to lay some blows in.

Archer re enters the match & he & O Khan each applied a Claw on the other’s face. O Khan switched to an anklelock on the mat and Archer scrambled to reach the ropes. Suzuki entered and hit some headbutts.

Archer hit running elbow shots in the corner on each opponent. O Khan locks Archer in the Sheep Killer with Henare making the cover for a 2 count. Henare hit a running knee in the corner on Archer before he nails Henare to the mat with Blackout to get the win for Suzuki Gun.

House Of Torture attacks Aussie Open at the bell and they all brawled on the floor. In the ring, House Of Torture began working over Kyle Fletcher. Fletcher nails a Tiger Suplex on Evil and he makes the hot tag to Mark Davis.

Davis entered and hit chops and forearm shots, then a double clothesline. House Of Torture began a beatdown of Davis. Yujiro Takahashi hits a fisherman’s suplex for a near fall. Fletcher hit his Doomsday Stunner on Takahashi for a near fall.

Tetsuya Naito & Mikey Nicholls kicks this match before they brawled to the floor, where Naito whipped him into a guardrail. Back in the ring, Sanada began targeting Nicholls’ left arm, and Los Ingobnrables De Japon stays in charge. Shane Haste made the hot tag and he hits a Saito suplex on Sanada, then a reverse suplex, dropping Naito on his stomach for a near fall.

Naito nailed a tornado DDT on Haste, and they were both down. Sanada hit a plancha to the floor. TMDK hits a double team neckbreaker move on Sanada, and Nicholls hit a DDT. Sanada fired back with a stunner on Nicholls but he misses a moonsault. Naito went for a Destino, but TMDK caught him and hits a double team move before they plant Sanada with Tankbuster to get the shocking win.

Match starts with Toru Yano & Hirooki Goto before Yano removed a corner ring pad, and he whips Goto then Yoshi Hashi, into the exposed corner. Hiroshi Tanahashi got in and worked over Goto’s left knee. Be Bop Tag Team dropped him with a team shoulder tackle. Goto hits a clothesline and made the hot tag to Yoshi Hashi & he hits a Rude Awakening on Tanahashi, and he took control of the offense before they began trading forearm shots.

Goto & Yano re entered with Goto hitting a spin kick in the corner and a running bulldog for a near fall then they traded forearm shots with Goto getting the better of the exchange. Yano grabbed his hair and pulled him to the mat. Yano gave Goto a slingshot into the corner, with his head hitting the exposed metal loop. Yoshi Hashi made the hot tag and traded more blows with Tanahashi. Yoshi Hashi hit a clothesline for a near fall before Tanahashi fires back with a swinging neckbreaker and a sling blade for a near fall.

Tanahashi went for the High Fly Flow on Yoshi Hashi but Yoshi Hashi got his knees up to block it before they traded more forearm shots. Yoshi Hashi hit a superkick, and Goto hit his neckbreaker over his knee on Tanahashi. 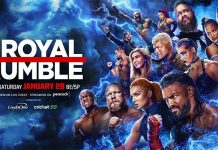 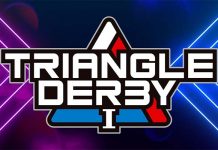