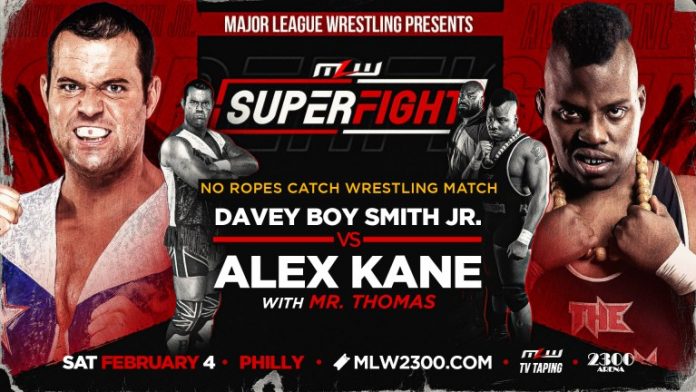 You can officially pencil in a new stipulation match for the first Major League Wrestling premium live event of the New Year.

On Wednesday, MLW announced the addition of Davey Boy Smith Jr. vs. Alex Kane in a no-ropes catch wrestling match for their MLW Superfight 2023 special event in Philadelphia, PA.

No Ropes Catch Wrestling Match! DBS vs. Kane in Philly

The ropes come down but will DBS go go to Suplex Island at SuperFight?

The first-ever NO ROPES Catch Wrestling Match in MLW history goes down next Saturday in South Philadelphia as Davey Boy Smith Jr. collides with the captain of the BOMAYE Fight Club, Alex Kane.

The ring ropes will come down as two of the best pound-for-pound grapplers square off in a catch-as-catch-can clash for the ages.

The true origins of MMA and No Holds Barred fighting, a no ropes catch wrestling bout has no rounds and no rules.

Noted for its brutal submission holds (“hooks”) and incorporating several English wrestling styles, catch wrestling is a violent form of combat sports. In catch wrestling, expect to see some of the most brutal tosses and suplexes ever. No wrestling holds or moves are banned, regardless of how dangerous they might be.

Catch wrestling, a grappling system and combat fighting style, was developed by J.G. Chambers in Britain in 1878. Billy Riley’s Snake Pit in Wigan, produced some of the sport’s all-time greatest catch wrestlers, including Billy Robinson.

A disciple of catch wrestling, Davey Boy Smith Jr. has trained under some of the all-time greats and is considered the torch bearer for this elite fighting style. Now, the captain of the British Bulldogs challenges the braggadocios leader of the BOMAYE Fight Club to a fight unlike any other in the history of MLW.

Will the Bulldog hook a submission and make Alex Kane tap?

DUMPSTER MATCH!
Real1 vs. Mance Warner vs. Microman vs. ?

One of the fastest growing wrestling leagues today, MLW programming is available in over 60 countries worldwide, including its new flagship series MLW Underground Wrestling on REELZ in the United States airing Tuesdays at 10pm ET / 7pm PT; and MLW Fusion on Pro Wrestling TV in the U.S. and Ayozat TV on SKY in the United Kingdom.