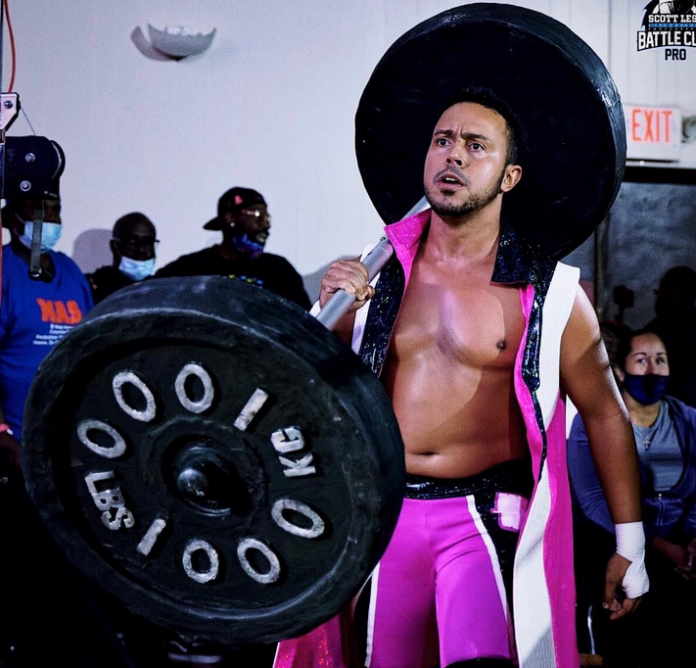 The year 2020 was rough on all of us, considering that the entire world shut down at one point, and nearly every topic was a matter of fierce debate on social media. Someone’s cousin’s mailman was suddenly an expert on the economy or health. Professional wrestling, similar to any other form of live entertainment, was either shuttered or run under strict guidelines. Among the videos of Karens that demanded to speak to a manager, Korean baseball that suddenly became a hit through its broadcast on ESPN while American sports were still navigating how to construct a bubble for games, and the general circus of social media, a viral clip emerged from the independent wrestling circuit.

“For anyone trying to emulate that, I wouldn’t recommend it.”

Mike Law, a longtime standout on the east coast of the indy circuit went for a dive through the ropes at an ECWA, one of the longest-running groups, event and as he hurdled himself toward his opponent, the foe moved, sending Mike through a chair and landing in a heap on the floor. The Puerto Rican star went through the chair like a dart, but somehow avoided serious injury from the incident.

It wasn’t long before the clip circulated on Twitter, generating thousands of viewers, with many wondering how in the wild world of sports the dive didn’t end in complete disaster. The clip went viral, but the career of Mike Law is not just a viral moment.

Law, known by his nickname “Colossal” and for walking around with allegedly thousands of pounds on a barbell, has more than two decades of in-ring experience. But, his tenure in the sport goes beyond even that, as he competed in underground shows at St. John’s church in Bed-Stuy, Brooklyn as young as 15 in 1999. He actually began his formal training just before that, but couldn’t resist the chance to get into a ring anytime possible for his earliest time inside the ring ropes that consisted of tedious practice drills or wearing a lucha mask at unofficial events.

However, after he finished proper training, he had his first pro bout in front of a spares crowd in Brooklyn in 2001, but the chance to finally debut in the sport is a vivid memory that sticks with him even twenty years later.

“I had my first pro match against Sam Shields, and that there are things that I did in that match that I haven’t done since. I learned a lot from Shields, who is criminally underrated,” Mike recalled.

In a prime example of how much more of a viral moment his career was, Law grew up in the industry, zigzagging to several states and even traveling to other countries to perform inside the squared circle, a journey he pictured in his mind from the time he was six years old as he watched Hogan battled the legendary Randy Savage as the larger than life spectacle beamed through the television.

“I have done everything from being a promoter, booking, vendor, commentary, agent work, to an in-ring performer as well. It all lends itself to serve in the several aspects of the business. I have trained and been in the ring against some of the very best, and it was all a learning experience for me.” he explained.

Aside from his interstate and international travels, Mike had notable appearances with Ring Of Honor, Combat Zone Wrestling, and ECWA. His cites his tenure as the ECWA champion as a career highlight, as well as the chance to compete in the prestigious Super 8 tournament on two different occasions. However, Mike, especially in recent years, has completely immersed himself in the sport even further, working as a trainer at the Fallout Shelter Academy in New York so between office work and wrestling, he keeps a jammed-packed schedule, but it’s something he also dives into for the chance to be as involved as possible in professional wrestling.

“Tuesdays and Thursdays are my long days. That’s business meetings all day, gym, and then training. I wake up at 7:30 AM and get home at 11:30 PM depending on traffic. I balance it because I love it. I love helping others realize their potential, I love the hustle. It’s important to install some of the ways that things were done in the past, along with the evolution of how the industry operates today. I’m eternally grateful for. Becoming a trainer at the Fallout Shelter, it has inspired me in so many ways. We all are pro wrestlers, but we also have to be showmen, personalities, entertainers, physical specimens, and athletes. It’s about trying to be a little bit of all of these categories.,” Law remarked.

True to his vision, Mike utilizes a well-rounded combination of in-ring style and persona to create a brand as a performer that can go bell-to-bell, as well as an athlete that can connect with an audience for the complete entertainment of the fans. His crisps in-ring work that blends fast-paced dynamics with a solid technical base provides proof of the many years he spent honing the craft of the squared circle.

After spending his entire adult life as a professional wrestler, Mike still remains motivated and wants continue to add to his list of accomplishments because he cites that drive to success as a primary reason for his longevity in the sport.

“I’d love to wrestle internationally more often and find full-time work for any of the major companies. I want to showcase to everyone on the bigger platforms that I’m an asset and I pride myself on being versatile and delivering on a high level. I think ultimately it is important to leave a legacy behind. Money and fame are all great things while we’re on this earth. Legacy is what keeps us alive after we are no longer here,” he explained.

So, the clip that showed the terrifying dive that wrapped a chair around the body of Mike Law wasn’t an example of his career, but it was a portion of a match in a career that he dedicated his life toward the pursuit of the goal of professional wrestling. His longevity speaks to his skill, while his dedication can be seen by his continuous efforts in every aspect of the industry.