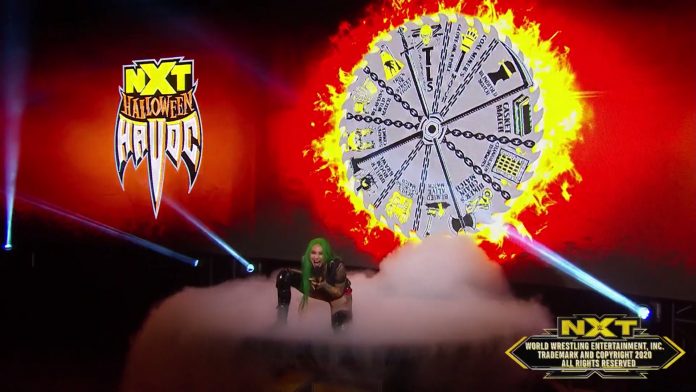 WWE NXT Halloween Havoc host Shotzi Blackheart appeared on WWE’s The Bump this morning and revealed that she will have four costume changes on tonight’s show. Some of her looks will be inspired by horror icon Elvira. Blackheart also revealed that her mini-tank will be decorated for Halloween. Blackheart will also take over the NXT Instagram Stories feed before and during tonight’s Halloween Havoc episode. She will be posting exclusive shots with a behind-the-scenes look at the action.

On a related note, the USA Network tweeted a video of Blackheart giving her 5 tips for adding “havoc” to your Halloween holiday. She elaborates in the video but her 5 tips are – set the spooky mood, carve pumpkins, revisit your favorite wrestling match (hers is Rey Mysterio vs. WWE Hall of Famer Eddie Guerrero at WCW Halloween Havoc 1997), watch your favorite scary movie, and have lots of candy.

WWE has a poll asking fans which Superstar is best equipped to handle the “Spin The Wheel, Make The Deal” gimmick. As of this writing, 34% have voted for NXT North American Champion Damian Priest while 31% went with NXT Women’s Champion Io Shirai, 20% for Johnny Gargano, and 15% for Candice LeRae. WWE also has a poll asking fans if Cameron Grimes is afraid of Dexter Lumis ahead of their Haunted House of Terror match on tonight’s show. As of this writing, 56% voted, “No, he’s terrified.” The rest voted yes.

NXT announcer Wade Barrett, who has challenged Vic Joseph to a Halloween costume contest for tonight’s show, tweeted a unique promotional poster for Halloween Havoc. You can see the poster below.

Tonight: the WEIRDOS will come out at #NXTHalloweenHavoc. This will be the wildest show of the year. DO NOT MISS IT!

If you need some tips to navigate #Halloween this year, @ShotziWWE has you covered. #WWENXT pic.twitter.com/3eduawKJx0