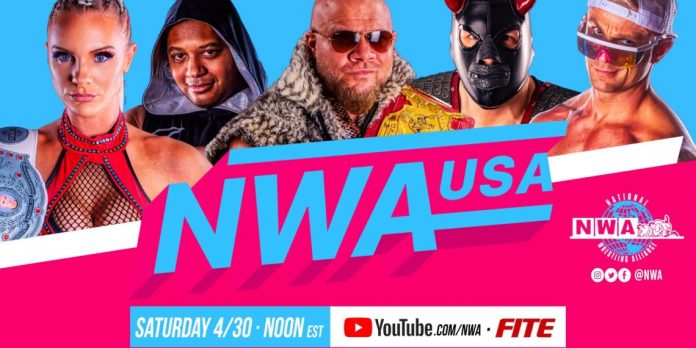 First Match: Kamille vs. Kaitlyn Alexis In A Non-Title Match

Alexis attacks Kamille with a hula hoop before the bell rings. Kamille ducks a clothesline from Alexis. Kamille with a Swinging Arm-Ringer. Kamille slams Alexis head on the top turnbuckle pad. Kamille repeatedly stomps on Alexis chest. Kamille with a GutWrench Suplex. Kamille talks smack to Alexis. Alexis fights from underneath. Kamille pulls Alexis down to the mat. Kamille sends Alexis to the corner. Alexis kicks Kamille in the face. Kamille catches Alexis in mid-air.

– Don’t forget to get your replica belts at fandubelts.com/NWA

– Colby Corino tells May Valentine that he’s not afraid of Kenny Morton because he’s already beat him before. Corino suggests that Ricky Morton should have a match with Wrecking Ball Legursky.

– Thomas Latimer tells Kyle Davis that he has his eyes set on the National Championship.

Second Match: Jamie Stanley vs. Gaagz The Gimp vs. KC Roxx In A Triple Threat Match

Stanley pulls Gimp down to the mat. Stanley talks smack to Gimp. Stanley applies The Cobra Twist. Roxx with a shoulder block. Roxx slips over Stanley’s back. Gimp punches Roxx. Stanley Powerslams Roxx. Gimp is throwing haymakers at Stanley. Stanley drives his knee into the midsection of Gimp. Stanley with a Cocky Cover for a one count. GImp applies The Sleeper Hold. Stanley sends Gimp back first into the canvas. Roxx side steps Gimp into the turnbuckles. Roxx with another Step Up Enzuigiri. Roxx kicks Stanley in the face. Stanley drops Roxx with The Flatliner. Stanley reverses out of the irish whip from Gimp. Gimp sends Stanley tumbling to the floor. Gimp licks Roxx’s face. Gimp connects with The Reverse DDT to pickup the victory.

Winner: Gaagz The Gimp via Pinfall

Dane hides behind the ropes. Collar and Elbow Tie Up. Dane backs Rockett into the turnbuckles. Dane talks smack to Rockett. Strong lockup. Stalemate in the corner. Rockett tells Dane to bring it. Back to the collar and elbow tie up. Dane pie faces Rockett. Rockett is throwing haymakers at Dane. Rockett sends Dane to the corner. Rockett dropkicks Dane to the floor. Dane regroups on the outside. Dane kicks Rockett in the gut. Rockett slams Dane’s head on the ring apron. Rockett with forearm shivers. Rockett and Dane are brawling around the ringside area. Rockett punches Dane in the back. Rockett rolls Dane back into the ring.

Dane catches Rockett in mid-air. Dane hits The Samoan Drop. Dane kicks Rockett in the gut. Dane slams the left knee of Rockett on the canvas. Dane repeatedly wraps the left leg of Rockett around the steel ring post. Dane slams the left leg of Rockett on the apron. Following a snap mare takeover, Dane applies the single leg crab. Rockett grabs the bottom rope which forces the break. Dane argues with the referee. Rockett kicks Dane in the face. Rockett ducks a clothesline from Dane. Rockett with two shoulder tackles. Rockett with The Stinger Splash. Rockett whips Dane across the ring. Rockett Powerslams Dane for a two count. Dane avoids The Rockett Kick. Dane connects with a Running Lariat to pickup the victory.