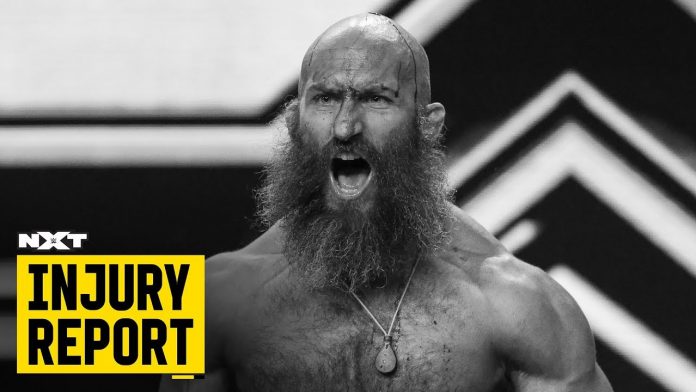 Above is the latest WWE NXT Injury Report video with Matt Camp, featuring updates on NXT Superstars from this week’s episode.

The following injuries were announced coming out of this week’s NXT episode on the USA Network, which are usually part of the storylines for the most part:

* Trent Seven re-aggravated his bruised larynx during the loss to Finn Balor. The NXT UK Superstar will be evaluated for additional symptoms.

* WWE medical confirmed that the welts and bruises on The Undisputed Era (NXT Tag Team Champions Kyle O’Reilly & Bobby Fish, Roderick Strong) were consistent with a pipe attack. There was no further injury status update on the three competitors, who were laid out backstage by Tommaso Ciampa

* Ciampa needed 3 staples to close the head wound that he suffered in the next segment, which was the brawl with NXT Champion Adam Cole ahead of their “Takeover: Portland” match on February 16. Ciampa ended the brawl by putting Cole through a table, but he did suffer the head wound. Ciampa ended up signing his Takeover contract and smearing blood all over the paper

Stay tuned for updates on this week’s NXT Injury Report.