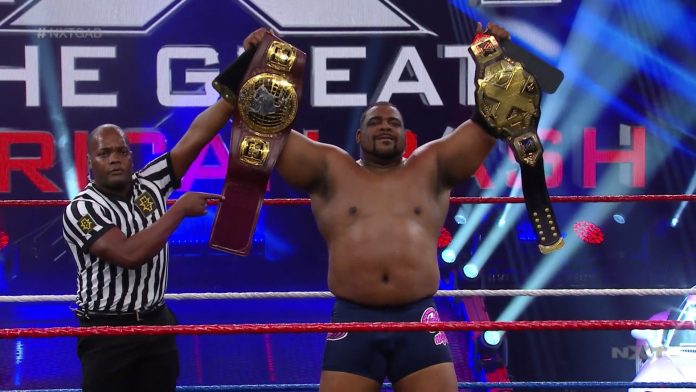 Tonight’s NXT episode opened up with NXT General Manager William Regal revealing that Lee had requested time to speak. In a pre-recorded segment, Lee talked about how he recently became the NXT Champion and NXT North American Champion by defeating Adam Cole in the historic “Winner Takes All” match last month. Lee said while he will continue to defend the NXT Title, he wanted everyone to have the same opportunities that he has, and doesn’t want to hold anyone back. That is why he is relinquishing the North American Title.

Lee won the North American Title back on January 22 of this year by defeating Roderick Strong.

Stay tuned for updates on the NXT North American Title situation. Below are a few shots from tonight’s opening segment:

"I will defend the #NXTChampionship… but at this point in time, I will be RELINQUISHING the NXT #NorthAmericanTItle."

A BLOCKBUSTER announcement from @RealKeithLee to kick off #WWENXT! pic.twitter.com/Dzrt8VKhZl

1️⃣ In the spirit of opportunity, @RealKeithLee RELINQUISHES the NXT North American Title…