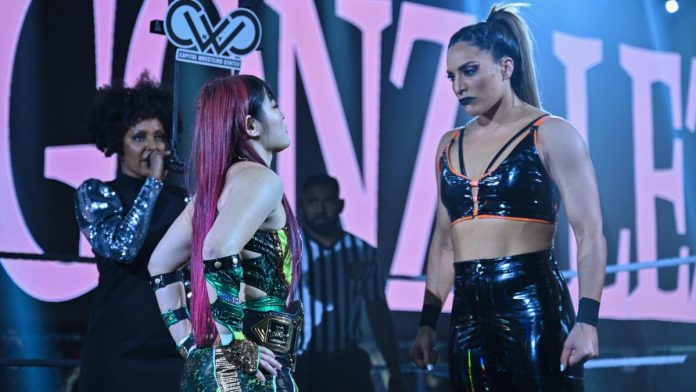 Io Shirai received a standing ovation after last night’s WWE NXT “Takeover: Stand and Deliver” Night One event went off the air. As noted, last night’s Takeover main event saw Raquel Gonzalez capture the NXT Women’s Title from Shirai. WWE released post-show footage of the Capitol Wrestling Center cheering for Shirai after the show ended. Shirai did a bow for the crowd and thanked them as a “thank you Io!” chant rang out.

WWE also released post-show footage of McKenzie Mitchell interviewing Gonzalez after the show. Mitchell asked the champ is the moment was surreal.

“Actually McKenzie, it’s not,” Gonzalez responded. “It’s not surreal. This is real life, this feels real, and there’s no other word to describe it other than, ‘I told you so!’ I knew I would be here one day. I knew I would be here, and to stand here right now is just… it’s just 100% real.”

Here are both videos plus a clip from their match-