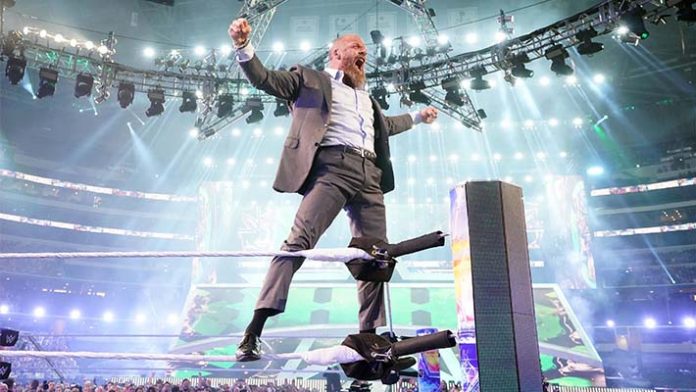 We’ve seen some incredibly radical changes happen on Raw and SmackDown in the short five weeks since Vince McMahon stepped down as chairman of the WWE. Fan favorites have returned. Titles have changed hands, and new matchups have freshened up each weekly show. But the question remains; is this a sign of a new WWE with Paul “Triple H” Levesque at the helm, or is this another short-lived honeymoon phase that will end quicker than Kofi vs Brock?

Too soon, I know. It will always be too soon.

On July 22, 2022, after a few sporadic appearances on WWE TV, and amidst a scandal that continues to rock the front office, Vince McMahon officially announced his retirement on Twitter, saying, “At 77, time for me to retire. Thank you, WWE Universe. Then. Now. Forever. Together.”

Whenever the winds of change blow toward WWE TV, I’m always reminded of a few times when I’ve heard this song and danced to it before. I clearly remember the November 2014 RAW episode after Survivor Series when after losing to Team Cena (powered by one of the most inspired Dolph Ziggler performances I’d ever seen) and subsequently losing control of Monday Night RAW, the Authority came out to the ring to say their final goodbye to the WWE Universe.

Sting interrupted the farewell speech with an electric debut, which would lead to a five-month program with Triple H, culminating with the Stinger losing his only Wrestlemania match, then suffering an injury in a contest with Seth Rollins and being forced to retire right before the one year mark of his WWE tenure. We were back into the same old by January, when the Royal Rumble winner Roman Reigns was booed out of the building, even with his cousin The Rock holding his arm up in victory.

On December 17, 2018, the family opened up Monday Night Raw in full force–Stephanie, Triple H, Vince and even Shane—and told the crowd some words they thought they’d never hear.

“We haven’t been doing the one thing that my father told us to do, which is to listen to the audience,” Stephanie said in a stern tone. “We have been suffocating our superstars, and all of that stops tonight.” Steph’s words sent the crowd into a frenzy. What was happening?

“We’re gonna give YOU what YOU want,” Triple H continued. “Something new, something fresh!” His final words still ring in the ears of diehard fans.

“As of now, YOU are the authority” Trips belted out, pointing at the audience.

I’m the authority? I run the show? ME?

No one Ran should have all that power.

The 2-year anniversary of the biggest lie ever told on national television.

This isn’t to say this promo was a total bold-faced lie. In the months that followed, the fans got exactly what they wanted. When we wanted a full-time champion, a babyface Seth Rollins won the Royal Rumble and marched into Wrestlemania to beat Brock Lesnar for the WWE Universal Championship. Kofi Kingston won the WWE Championship from Daniel Bryan at that show, and things were new and fresh.

When the time came to re-brand SmackDown Live that Fall, FOX needed a box-office attraction, so WWE offered up Brock to not only return in October, but to beat Kofi Kingston for the WWE Title.

I mean to SQUASH Kofi Kingston.

Too Soon?
It will never not be too soon.

Anyway, the last month plus we’ve seen some immense immediate changes on Raw and SmackDown, including some intense reality inspired storylines and some shocking returns. The return of faces old and new is a much-needed breath of fresh air for the company, but how much talent is left out there? There are certainly men and women who would be excited to work for this new regime who would not even be on the table under the old guard. How many of them are main event level talents? Remains to be seen.

The problem though, is that some of these men and women who would be perfect for this new look WWE work for other companies, or may even hold grudges after being mercilessly fired on just another bloody Monday. A rumor has already surfaced that WWE may be “tampering” with AEW talent by inquiring on their availability and happiness. This person allegedly shut WWE down and then told AEW brass that the E was sniffing around, leading to Tony Khan making a call to the E, asking them not to inquire about talent.

As of now, there are 44 superstars that have been released just this year, not counting the many more that were cut in previous years. A handful have not re-signed with another organization. Hours after the announcement of WWE expanding their brand to NXT Europe, virtually every NXT UK superstar has been purged. No telling if any of these folks return, or if any of these returns would move the needle for anyone outside of the most hardcore of fans.

One example is that most of the internet fans seem to really want Bray Wyatt back, but many of them spent the majority of Bray’s time at WWE complaining of him being misused. There’s really no telling what could happen and when.

But I bring these two past examples (and there are plenty more) to reiterate that while things are exciting right now for WWE fans, I urge you all to tread lightly and keep that guard up. And to keep watching other wrestling programming… because ultimately, I think competition will fuel this surge of creativity as much as anything.

One thing’s for sure though: this new-look WWE television programming has made every week a must-watch, which literally hasn’t happened in years. For now, though, I’ve got two words for Mr. Levesque:

See ya next Monday. 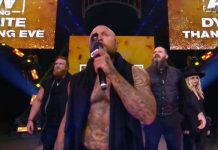