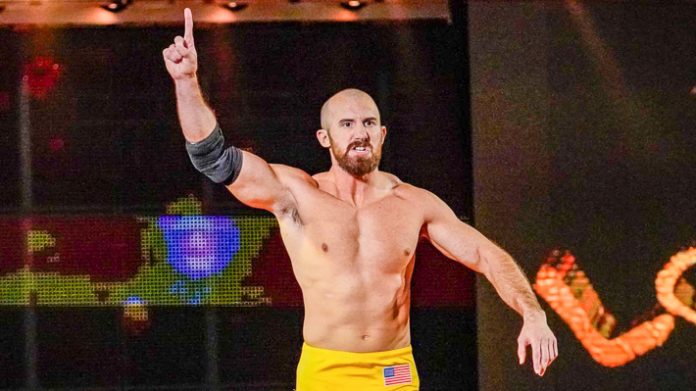 “Steal the show before the show. #SmackDown,” Ali wrote once again this week, which looks to be his new social media catchphrase now that he’s been reduced to working pre-show dark matches.

– Tonight’s WWE Super SmackDown episode saw Alexa Bliss and Nikki Cross defeat Sonya Deville and Mandy Rose in tag team action. It was first noted on commentary that the winners of the match would earn a title shot from WWE Women’s Tag Team Champions The Kabuki Warriors – Asuka and Kairi Sane. It was later indicated that the winners may earn a title shot, and after the match it was noted that the win would put Bliss and Cross in line for a title match.

WWE has not confirmed when Cross and Bliss vs. Asuka and Sane will happen, but we’ll keep you updated. Below is video from tonight’s tag team match:

– WWE NXT Superstar Oney Lorcan made his return to WWE TV this week. Lorcan worked the recent NXT UK TV tapings in York, England, and returned on this week’s NXT UK episode as he and Danny Burch defeated The Hunt. Lorcan then returned on tonight’s WWE 205 Live episode, helping Burch after a post-match attack from The Brian Kendrick and Ariya Daivari. Kendrick wrestled Burch on the show, but lost by DQ after Burch was attacked by Daivari.

Lorcan had been out of action since requesting his WWE release in October 2019. His last TV match before this week was the loss to Lio Rush on the October 25 205 Live episode. Lorcan then announced on December 6 that he had signed a new multi-year WWE contract. Below are a few shots from tonight’s return:

One of the many reasons as to why @strongstylebrit is a technical genius. #205Live @mrbriankendrick pic.twitter.com/GOIkG99rtI

KENDRICK AND DAIVARI WERE GOING TO HURT BURCH'S KNEE REAL BAD BUT THEN ONEY CAME TO THE RESCUE WITH A CHAIR AND EVERYTHING IS OKAY NOW#205Live @_StarDESTROYER @strongstylebrit @mrbriankendrick @AriyaDaivariWWE pic.twitter.com/hLRN86gBjN