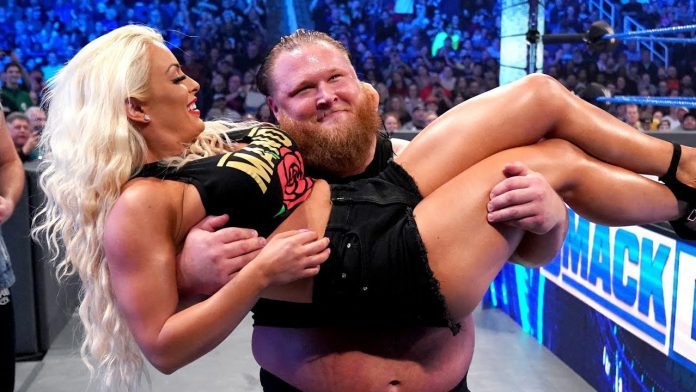 During an interview with FOX Sports, Otis commented on his storyline with Mandy Rose, winning the Money in the Bank match, and more. You can check out the highlights from the interview below:

Otis on winning Money in the Bank: “I’m just wondering how much stuff I can fit into that briefcase — I’m just kidding. But it’s definitely a crazy feeling. I was mentioning in interviews before, it’s crazy, watching this match, the history of this match, seeing the first one at WrestleMania, and seeing what it’s become now as its own pay-per-view, but also this history-making event inside of the headquarters. That was definitely an experience. I’ve been to the headquarters before, but I had no idea where a lot of stuff was. So every time we did something—there was an exit door. Being a big man my size, it was kind of hard to keep my speed up, so I used my certain strategies there. NFL possession, baby. Right between these hands.”

Otis on cashing in his briefcase: “The thing with me, honey, is, I’ve got a simple mind, so I don’t even know what’s going on next. I would hate to say it now, I’ll leave it a surprise. But in my mentality, as the Dozer, the sooner the better. The sooner the better. Let’s get this thing cashed in and become champion. You’ve just got to take action. I mean, no one has any idea what’s going on in general right now, so you might as well just go for it.”

On if he gauges the reactions from WrestleMania 36 on: “Yeah, it never sets in, with our lifestyles, the way that working here is, we just keep on going, you know? And momentum is key, and obviously luck is a huge factor in that. I’m lucky enough to get the lady of my dreams and to get these opportunities, like a win over Dolph. That was Dolph and my first single WrestleMania match, and now we’ve got the Money in the Bank briefcase. So it sets in, but I don’t think it totally sets in until one day, I’m an old man and I go, “That was probably pretty cool.”