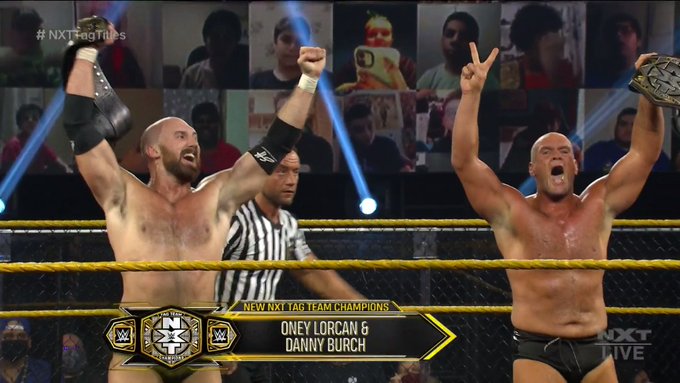 This is the first title reign for Lorcan and Burch. Breezango won the titles back on the August 26 NXT episode, by defeating Imperium. This was just the second title defense for Breezango since winning the belts.

The match was originally supposed to be Roderick Strong and Bobby Fish vs. Breezango but Fish was attacked earlier in the night, and taken to a local hospital for a MRI. Kyle O’Reilly was then put with Strong, but Strong was also attacked backstage. NXT General Manager William Regal then put Lorcan and Burch in the main event after O’Reilly didn’t want to tag. The finish of the title change saw a masked man interfere to attack Breezango. Breeze then took a low blow from Burch, then the double team move for the pin. The masked man revealed himself to be Pat McAfee. McAfee taunted The Undisputed Era when introducing Lorcan and Burch as the new champions. It looks like McAfee may be the one who paid Ridge Holland to attack Adam Cole at “Takeover: 31” a few weeks back, and the one who attacked Strong and Fish tonight. Cole was featured in a backstage segment tonight, via video, and said he’s recovering from his rib injury.

The #UndisputedERA’s past has come back to haunt them!@PatMcAfeeShow is back, and he's celebrating with the NEW NXT Tag Team Champions @ONEYLORCAN & @strongstylebrit! #WWENXT pic.twitter.com/xpsfFiLxke

"and that my friend… is UNDISPUTED." – @PatMcAfeeShow

It all makes sense now.