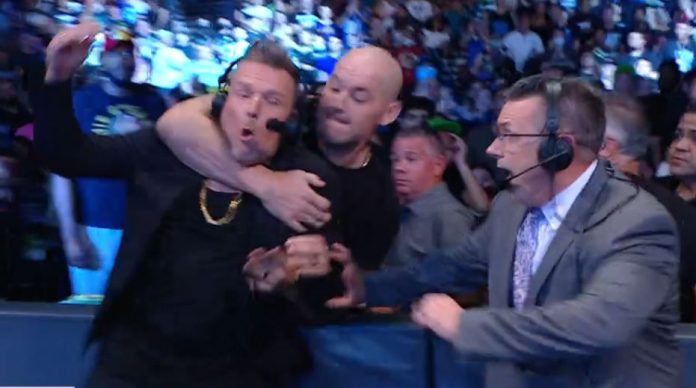 As PWMania.com previously reported, Money In the Bank ended with Men’s MITB Ladder Match Theory celebrating his briefcase victory, which came after he had earlier in the evening lost the WWE United States Title to Bobby Lashley. After the show aired on Peacock and the WWE Network, WWE revealed post-show footage of Corbin attacking McAfee.

As Theory finished his celebration, the footage shows McAfee and Michael Cole standing close to the barrier. McAfee was suddenly grabbed by Corbin from behind, who then lifted him over the barrier and beat him down while fans watched. Then Corbin threw McAfee back over the barrier and continued to beat him until finishing him with End of Days.

The post-show segment was concluded with Corbin accepting McAfee’s challenge for WWE SummerSlam. The complete video is shown below.

As previously mentioned, McAfee challenged Corbin to a match at SummerSlam two weeks ago after the two had a falling out last month. On Friday’s go-home SmackDown, Corbin avoided the challenge, and after failing to win a spot in Money In the Bank, McAfee teased him. He has since attacked McAfee and agreed to take the SummerSlam challenge.

After it was reported that McAfee has limitless potential in WWE and is well-liked by the company, McAfee is being brought back to the ring by WWE. The recent feud between the former NFL kicker turned television personality and Theory and Vince McMahon resulted in a program at WrestleMania 38 in April. McAfee defeated Theory on The Grandest Stage of Them All, but lost an impromptu match to Mr. McMahon later. In the final moments of the segment, WWE Hall of Famer Steve Austin stunned Theory and McMahon with Stone Cold Stunners before bringing McAfee back into the ring for a beer party celebration and a Stunner of his own. McAfee will compete against Corbin at SummerSlam in his fifth match with WWE.

On Saturday, July 30 at Nissan Stadium in Nashville, Tennessee, the 2022 WWE SummerSlam Premium Live Event is scheduled. Here is what looks to be the updated card:

Logan Paul vs. The Miz

You can check out the full post-show segment from Money In the Bank below: