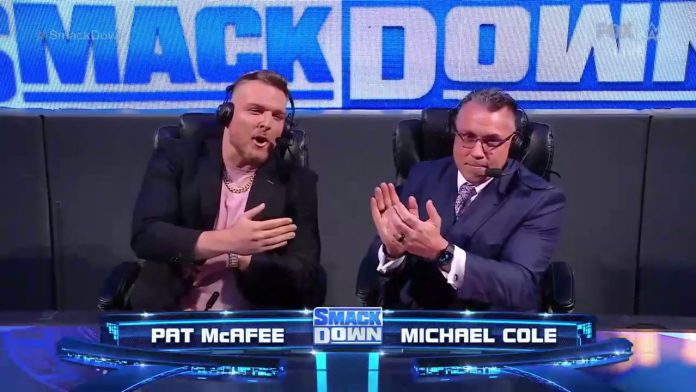 “He is a great conversation, Bruce Prichard,” McAfee said. “Great conversation. They all are over at the Wrestling World. The internet says a lot of things about a lot of people who probably been around WWE for like 30-40 years. I guess there’s a lot of pent-up potential stories or happenings that could go through there. They’ve all been very nice to me, I’m very thankful.”

McAfee continued and mentioned how Dunn and McMahon are always in his ear on Friday nights., “Other people probably experienced something different, I’m just going to tell you how I… Bruce Prichard’s fucking awesome, Kevin Dunn also, awesome. He’s in my ear every single show, and by the way, Vince McMahon in my ear, awesome. I don’t ever see him in real life anymore though, I just hear him. The Voice of God in my ear.”

McAfee did his best impersonation of the signature McMahon laugh and recalled the reaction he received when he got wrapped up in the wires during last week’s ringside brawl between Seth Rollins and WWE Hall of Famer Edge.

“[McMahon laugh] That’s when I know I’ve really done it,” McAfee said. “Like when I almost got my head ripped off, you know, at the end of that thing… because that thing’s clipped to my sport-coat, and it was wrapped around his foot, so it was like, dragging me a little bit. I’m like, well I’m not going to deal with this at all, and I go running, and I go put the other one on, and as soon as I put the headset back on, there’s a pretty good [McMahon laugh] in my ear.”

McAfee’s co-host mentioned how Vince must want him to hear the hearty laughs as he has to push the talk button for McAfee to hear it.

“Yeah and there’s other things he wants me to hear too, throughout the night,” McAfee responded, laughing about how he then knows to tone it down on commentary.

McAfee talked more about what it’s like to have Vince in his ear every Friday night, and how sometimes he feels like Vince wants him to speak while a wrestler or Michael Cole might be talking.

“There’s other things though, where he’s… hey, there’s sometimes where I feel like he’s in a groove, where he’ll just ask me a question in the middle of a show, and he wants me to answer it live, obviously,” McAfee said. “So he’s like, ‘What about?’… and then sometimes Cole will be in the middle of something, or even a wrestler will be speaking, and he’s like, ‘Cut them off!’ And I’m like, ‘Ah!’ And I want to tell Cole, like, ‘I think there’s something much better that could be said right now.’ It’s coming from a voice inside of my brain right now, that I want to let you know it’s awesome. It is amazing, I enjoy the hell out of it.”