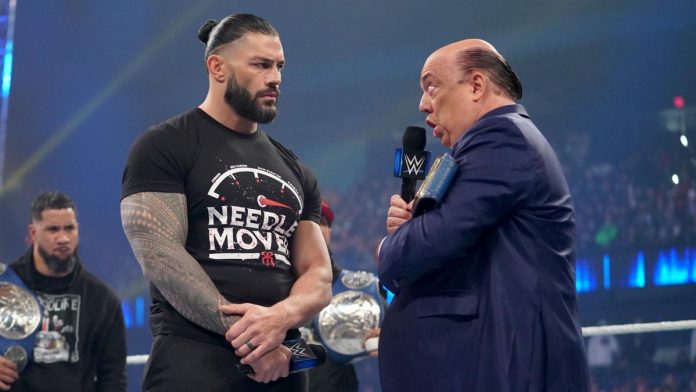 Paul Heyman took to Instagram today and reacted to WWE Universal Champion Roman Reigns’ major milestone of 500 days as champion. We noted before how WWE marked the milestone with a tweet late last night. Heyman posted a statement on the milestone and congratulated Reigns, and also took a bit of credit for the achievement. He also reminded everyone how current WWE Champion Brock Lesnar was the first Superstar to hold the Universal Title for 500 consecutive days.

“The entire WWE Universe (and #multiverse, and #metaverse) should be spending today ACKNOWLEDGING the fact that @romanreigns is only the second being in history (other than The Beast BRRRRRRRRROCK LESNAR) to hold the @WWE Universal Heavyweight Championship for 500 consecutive days. I would besmirch, indeed disparage my own contributions and accomplishments if I didn’t ACKNOWLEDGE this amazing achievement by the #TribalChief of the #IslandOfRelevancy. It has been, without question, a championship reign for the history books, including the single most declarative pinfall victory in the history of #WrestleMania main events. I therefore congratulate the #HeadOfTheTable on day 500 of his uninterrupted tenure as the reigning, defending, undisputed, #WWE #UniversalHeavyweightChampion!,” Heyman wrote.

Heyman spent most of the 500 days with Reigns, joining him two days before he won the title at WWE Payback 2020. Reigns fired and attacked Heyman a few weeks back on SmackDown, and Heyman reunited with Lesnar shortly after that.

Reigns responded to the earlier milestone tweet from WWE and simply wrote, “#AcknowledgeMe”

Reigns is scheduled to defend the WWE Universal Title against Seth Rollins at the Royal Rumble on January 29.