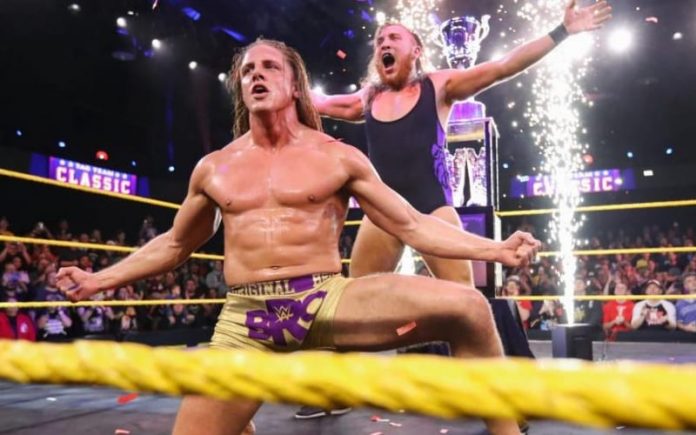 During a recent interview with talkSport, Pete Dunne commented on teaming up with Matt Riddle, if he’s spoken to him since he’s been called up to the main roster, and more. You can check out some highlights from the interview below:

On if he has spoken to Matt Riddle since he was called up to the WWE main roster: “I haven’t spoken to him too much. But obviously I’m really happy for him that he’s getting to do that. Obviously, now, there was no way our team could just hold on to the Tag Team titles. It’s gone and we have to live with that. In the moment it was brilliant and we had way more defences in us and who knows, maybe we would have got to face each other down the line, who knows? I feel like there was so much to do there and it’s such a shame that it’s gone. But hopefully one day down the line, whether it’s on SmackDown, in NXT or NXT UK, whatever happens, hopefully we can recoup that finish it how we were supposed to.”

On wanting to work with Drake Maverick: “Honestly, someone that I would like to work with would be Drake Maverick. We never really got to work with each other, but we’re both from Birmingham, the chances of all these lads from the West Midlands being able to make names for themselves in the WWE… I never would have predicted that years ago. So I’d love to get in there with someone like him and I feel like it would be an interesting dynamic. The way he is and the way I am would be something people probably wouldn’t expect that would be really interesting.”

On being happy that Drake got his job back: “The only thing I can think is, he got a job back. That’s what he really wanted, so I’m happy for him. There’s no other way I can see it other than that. Whether people like that storyline or not doesn’t rally matter, the important thing is, at the end of it, he got a contract and he’s happy. But I’d love to do something over in the States or back in the UK, however this pans out with travel restrictions and whatnot. Who knows?”