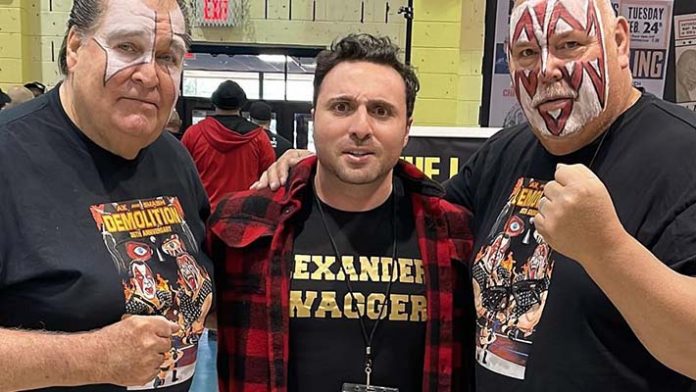 I’m back here today with what you might call the “Director’s Cut” of my interviews with former WWE writer and co-producer of “The Last Match: A Pro-Wrestling Rock Musical,” Phil Blechman, and wrestling veteran Tommy Fierro, who is also a producer for the upcoming Rock and Wrestling musical The Last Match!

If you haven’t already, make sure to check out my original article on the upcoming Rock Wrestling musical.

The pair gave me a lot more awesome information than I could fit in the first article, and we here at PWMania.com figure that you might just get a kick out of reading the complete interview.

Here is our unreleased interview with Phil Blechman:

What was it like going from the world of theatrical stage production into the writers’ room at WWE?

“My entire professional life prior to working at WWE was in theater, be it writing, producing, directing, or performing. So it prepared me well for working the live shows at WWE because those are functionally live theater shows that just happen to be filmed for TV. Pro wrestling is theater, even if the performers are trained wrestlers rather than trained actors, the mechanics of storytelling are the same.”

Did your previous experience help or hinder your job as a WWE writer?

“My previous experience in theater was definitely a benefit when it came to working the WWE live tapings since it was just like being in my element backstage at a show. Despite the chaos that often ensues with a show adjusting on the fly due to unforeseen circumstances, I always felt comfortable rolling with the punches because that’s required in live theater.

“The creative team has a home team that stays in the WWE headquarters in CT and a road team that travels to each RAW, SmackDown, and PPV — I was on the road team.”

How did the idea to combine wrestling with a rock musical come about?

“The show’s lead producer Jeremiah James, who also conceived the project, is a lifelong, die-hard wrestling fan! He always dreamed about writing a wrestling rock show so he and his writing partner, Jason Huza, bounced around ideas. Then they met Sylvana Joyce and her husband Chris, who wrote the music and lyrics and that was it! All the pieces together. Some die-hard wrestling fans wanted to bring the world of pro-wrestling to a new audience in a genre and context where it totally works.”

Could The Last Match stand alone as a motion picture in the future? If so, who would you pick to play the lead role of Ben Vengence on the big screen?

“Oh yeah, it would be an awesome motion picture. Since The Last Match was made by wrestling fans for wrestling fans, I think casting the lead role should reflect that. I’d want to cast a professional wrestler to play the part — think Chris Jericho, AJ Styles, Randy Orton, Edge, or a name as big as them — who could really sell that their last match is larger than life.”

What are the major similarities and/or differences in putting together a wrestling event as opposed to a theatrical production?

“But the musical theater element is so much more involved. Having to produce the music the band costumes building out the immersive world. Live body mics etc

“Then finding actors that can do the physicality of minimalistic wrestling as well as be good actors and singers and tell the story.

Is there a character in The Last Match that you identify with as a promoter? How much input did you have on that perspective during the writing/production phase?

“The script was already written by the time I got involved. I’ll be honest though, after seeing it in person I wouldn’t have changed a thing. I added some suggestions and tweaks but for the most part- it was literally spot on. I honestly think all of the characters are amazing in it and the actors do an unreal job playing these roles. I am so excited for the masses to see it.”

More information on “The Last Match: A Pro-Wrestling Rock Musical” is available at TheLastMatchMusical.com and Instagram @thelastmatchmusical.

The next single will release on August 1, 2022. You can listen to The Last Match’s first official track by Ramin Karimloo, Thirty Years, below: