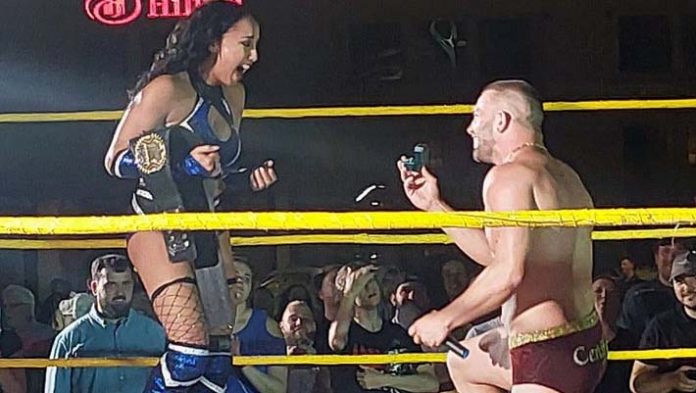 AEW star Leila Grey and ‘Certified’ Luke Kurtis, the current OVW Rush Champion, just got engaged. The proposal took place during the OVW event on Friday. A big congratulations to the happy couple!

At an Ohio Valley Wrestling event on Friday in Nashville, Grey successfully defended her OVW Women’s Championship against Freya The Slaya. Kurtis, her boyfriend, proposed to the All Elite Wrestling star shortly after the bout when he came to the ring.

She wrote the following on Twitter about the special moment, “And just like that… I’m a FIANCÉ!!!!! I love you so much @The_LukeKurtis. Long sentimental post coming soon.”

And just like that… I’m a FIANCÉ!!!!!
I love you so much @The_LukeKurtis
Long sentimental post coming soon💙💍 https://t.co/2uoABwMOrT

Since defeating Freya the Slaya in April, Grey has held the OVW Women’s Championship. She has worked for a number of promotions since entering the wrestling industry in 2020, notably AEW, where she has primarily worked on its Dark and Elevation shows.

She competed in the AEW for the first time in March 2021, losing to Tay Conti. On the Blood & Guts episode of AEW Dynamite a few weeks ago, Grey faced Jade Cargill for the TBS Title but lost. Thanks to Cargill’s publicist Stokely Hathaway, she later became one of her Baddies.

On Monday’s edition of Dark: Elevation, Grey won her most recent AEW match, defeating JC. On a recent Dynamite show, she was originally supposed to compete in a trios match with Hogan and Cargill, but she was pulled from the match since she didn’t have medical clearance.

She competed as Cat Cardoza in a WWE SmackDown bout in April where she faced Raquel Rodriguez.