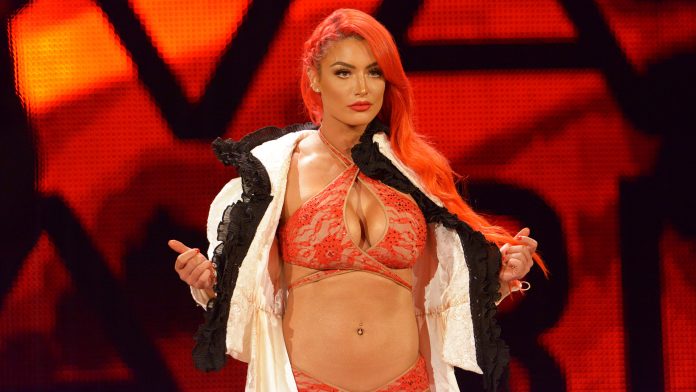 Eva Marie was training at the WWE Performance Center in Orlando on Monday. Eva took to Instagram and Twitter and gave a shout-out to WWE Coach Norman Smiley, noting that he has believed in her since day one.

“Major shout to my coach, the legend Mr Norman Smiley who has believed in me since day 1 and continues to kick my A$$ [hands raised emoji] [flex emoji] [wrestling emoji] #MyOG – @wwe @wwenxt #EVALution #ALLEverything #WWERaw”

This week’s WWE RAW on the USA Network featured the fourth “Eva-Lution” vignette to build to Eva’s return to the WWE storylines. You can see that vignette below. Based on her recent vignettes, there has been speculation on Eva performing as some sort of manager, but it looks like she is also preparing to resume her in-ring career.

Eva was trending on social media after last night’s RAW vignette aired. She commented on being a trending topic and wrote-

Eva also made several tweets about being the new face of RAW, which brought mixed reactions from the WWE Universe. There is no word on when Eva will return to RAW live, but WWE noted this week that she is “almost ready” to bring the Eva-Lution to Monday nights, and that her arrival is imminent.

As the #EVALution grows we trend more and more each week 👊🏽🦾@WWE #ALLEverything pic.twitter.com/tfPlzh6fuo

Major shout to my coach, the legend Norman Smiley who has believed in me since day 1 and continues to kick my A$$ 🙌🏽🦾 🤼‍♂️ #MyOG
–@wwe#EVALution #ALLEverything #WWERaw pic.twitter.com/VK8rUVZmzv