The following clipping from 1989 has surfaced online revealing an Undertaker gimmick before WWE’s version: 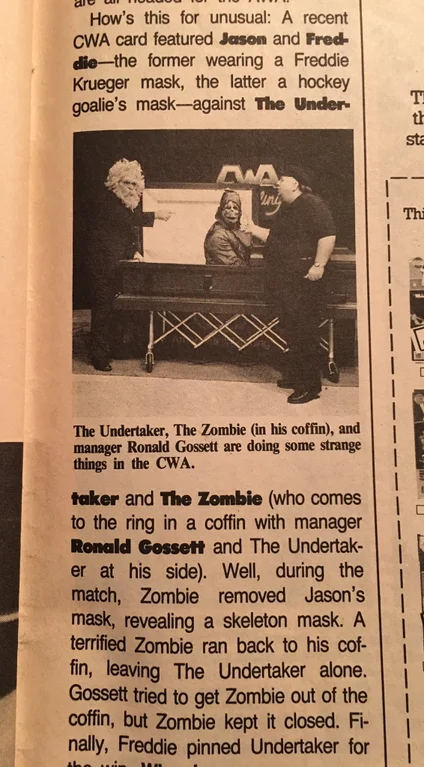 An article on KayfabeMemories.com explained the gimmick:

“In 1989 the few remaining promoters in the US were struggling. While some no doubt remained true to what had once made them successful, times had changed and they were just holding on in most cases. Others tried to change with the times and tried what they felt would work best. What was making the most money at the time in the US was the WWF. So with very few promoters trying to find a niche to fill as an alternative to what was on the market and with creativity apparently running in short supply, most promoters that were left simply copied the most successful product on the market, the WWF. The WWF product though was kiddie fare compared to what most promoters had served up for years and what most longtime fans expected from the business. So as the WWF product permeated the wrestling business with cookie-cutter cartoon characters in 1989, through their own product and through the product of their imitators, would Memphis/CWA fans find their promotion testing their credibility with hard-to-digest characters?

The answer would be yes as around mid-year, the Memphis promotion jumped on the bandwagon with hard-to-digest characters mostly based on horror movie characters. Freddie, Jason, The Zombie, The Undertaker, The Wolfman, and Frankenstein became part of the week to week crew of wrestlers the area fans saw.”