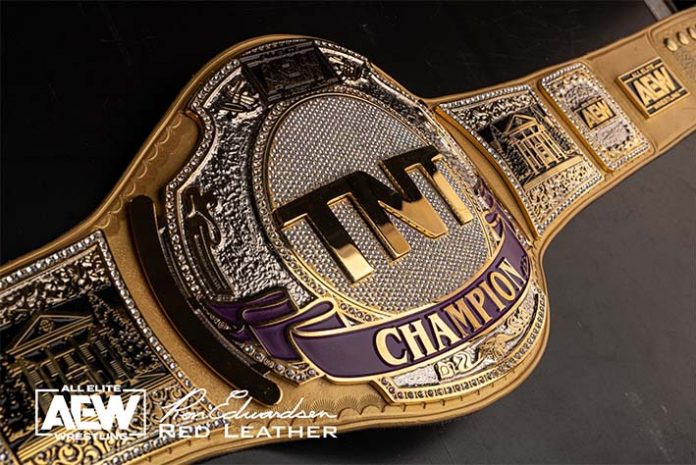 Sky, Dan Lambert, and Ethan Page appeared in the ring at Friday night’s live Rampage from the Michelob Ultra Arena in Las Vegas. Lambert handed Sky the new title, which has a lot more gold featured than the previous one.

TNT Champion @ScorpioSky gets presented with a new TNT Title after @sammyguevara and @TayConti destroyed his previous one! Watch #AEWRampage LIVE on @tntdrama right now! pic.twitter.com/vOlMoPKHgC

After Sammy Guevara and Tay Conti destroyed his first title belt, Sky needed a new one.

The side plates on the new belt are identical to those on the old one. The reverse of the leather strap features “8-24,” which are the jersey numbers worn by the late Kobe Bryant while he was a player of the NBA’s Los Angeles Lakers, who also utilize yellow/gold and purple as their colors. The Lakers are Sky’s favorite team.

Sky is in his second reign as TNT Champion, having held the title for 29 days and counting. He defeated Guevara in a Ladder Match on the April 27 edition of AEW Dynamite to become champion.

Here are photos of the new title belt: