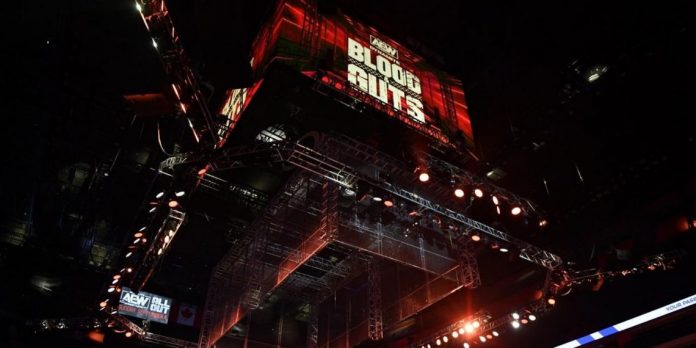 Fans are settling into their seats at the Little Caesars Arena in Detroit as the doors open for tonight’s Blood & Guts episode of AEW Dynamite on TBS.

Fans on Twitter have released the first images of the Blood & Guts set and double cage, as seen below. Below, you can also view the brand-new Blood & Guts poster and the official t-shirt for this evening’s match.

WrestleTix reports that AEW added certain hard-cam section tickets for sales earlier today. There were 526 tickets left for tonight’s Dynamite special as of 6:30 p.m. ET, out of the 11,260 that were issued.

Stay tuned to PWMania.com for more and join us for live coverage at 8 p.m. ET.

From fireballs to haircuts, we've seen it all and at 8/7c on #AEWDynamite the rivalry continues with #BloodAndGuts 😤 pic.twitter.com/uzMqGsZsz5

Are you ready for the violence? The #BloodAndGuts event shirt is available NOW at https://t.co/9hHlXpcSbp. Check it out!#shopaew #aew #aewdynamite pic.twitter.com/bfzaAMI5YK

The doors have just opened at the @LCArena_Detroit and #AEWDynamite #BloodAndGuts is almost here!