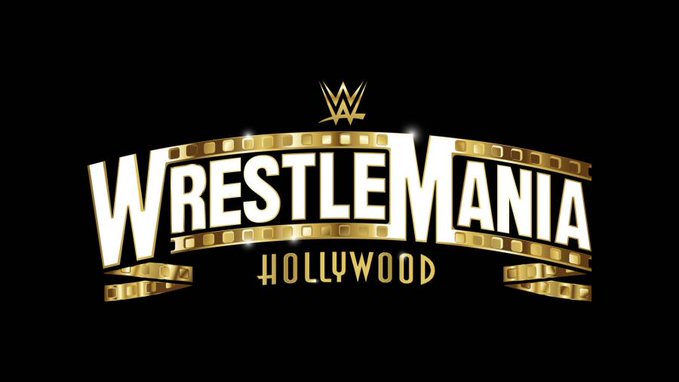 It’s interesting to note that WWE usually makes a big deal out of their WrestleMania press conferences, but that was not the case today. The Los Angeles Times streamed the event, which you can see below, but WWE did not. The press conference was held while construction was being done in the background. The $4.963 billion stadium, which is set to have a seating capacity of 70,240, is scheduled to open in July 25. It was noted during today’s press conference that they are about 85% done with construction. Officials broke ground on the project back on November 17, 2016.

Another interesting note from the presser is that Lynch was wearing a bandage over the back of her neck to sell last night’s RAW attack by Shayna Baszler. As noted, Baszler attacked Lynch to build to their rumored WrestleMania 36 match, and bit the back of her neck. Below is a photo of Lynch wearing the bandage at today’s press conference.

Saboor opened the press conference and talked about how there are so many people and organizations that played a part in principle of the community-wide effort to bring WrestleMania 37 in, for Los Angeles, and importantly Inglewood. Saboor said the stadium is the most unprecedented and exciting backdrops that WrestleMania has ever been lucky enough to experience.

Gannon then took the podium and thanked WWE and Mayor Butts, on behalf of the stadium. He said it’s incredible to welcome WWE to its new home for WrestleMania. Gannon said he’s proud to bring WrestleMania 37 to the Inglewood community. He touted the economic impact that WrestleMania usually has on its host city, and said they are eager to work with WWE to amplify their current efforts, and to make a difference to Inglewood residents. Gannon said the stadium has already provided more than $26 million in wages and more than $63 million in contracts for local businesses and residents. He said job creation is a part of the stadium’s commitment to have a lasting impact on the city. He also said construction is more than 85% complete, and that they have more than 3,500 workers on site each day. They are still planning to open in July and are focused on bringing extraordinary events to their guests from day one, and they are bringing world renowned events to Los Angeles that wouldn’t be here if it weren’t for the stadium, such as WrestleMania 37.

Gannon then introduced McMahon, noting that her commitment and leadership skills have helped make WWE into a global company. Gannon said he couldn’t be more excited to partner with Stephanie and her team to deliver a pop culture extravaganza and phenomenon, in the pop culture capital of the world. Stephanie talked about how WrestleMania is like no other event, calling it the greatest combination of pop culture and sports entertainment. She described WrestleMania as part pop concert, part live action, part story-telling, and the most incredible thing you’ll ever be a part of. Stephanie said none of this would happen without the people here today and the people that will fill the stadium. She also talked about how WWE is all about community, which is why they call their fans the WWE Universe. She said everyone is a part of the community and are in this together, if they’re an employee, a Superstar, a fan, a business partner, or otherwise.

Stephanie also briefly talked about how WWE Chairman & CEO Vince McMahon came up with WrestleMania to put WWE on the map, making their own Super Bowl or Oscars, to get people talking about WWE at all the water-coolers around the world because there was no social media back then. She said she’s thankful WrestleMania I worked out because her parents mortgaged everything they owned to make it happen, and now we’re on the verge of WrestleMania 37 taking place at the most incredible, most unique stadium in the world, bringing the most iconic event in the world. She said this is a partnership that’s 15 years in the making, and she can’t wait for everyone to be a part of it.

Stephanie then brought Mayor Butts, Gannon, and Zeidman back up for another thank-you and round of applause. She mentioned how the STAPLES Center will also play a huge part of WrestleMania 37 Week as it will host SmackDown, WWE NXT Takeover, and RAW. Reigns and Lynch were then introduced by Stephanie, and they brought out custom WWE Title belts for the local officials. Stephanie said these belts were to thank them for being champions of the community, and to thank them for being champions in bringing WrestleMania to the stadium in what will be an unprecedented event. Stephanie thanked everyone again, and the wrapped the press event as everyone posed for photo-ops.

Below are a few shots from today’s press event at the stadium, including the photo of Becky wearing the bandage and the live stream:

Live coverage of the @WrestleMania 37 press conference from @SoFiStadium. https://t.co/KaQgpk5LPK

#WWE Raw Womens Champion @BeckyLynchWWE talks about how her neck is doing after being bitten by Shayna Baszler last night on Raw. She said call her “Becky The Vampire Slayer.” pic.twitter.com/F5eDnexweu

The inside of @SoFiStadium is GIGANTIC!! This place filled for WrestleMania 37 is gonna be awesome. pic.twitter.com/O1xNcQ2MCp

On-site at @SoFiStadium for the #WrestleMania37 press event

No, I’m not going undercover to get in. It’s still a construction zone.