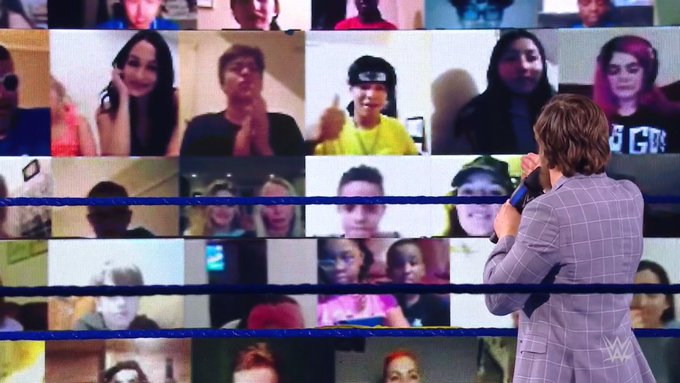 WWE had several Hall of Famers sitting in the virtual ThunderDome crowd during tonight’s SmackDown on FOX season two premiere.

Jeff Jarrett was shown in the crowd during Lars Sullivan’s win over Jeff Hardy. Brie Bella and daughter Birdie were shown during Daniel Bryan’s in-ring return promo, and were given a shout-out by the man of the house. Ric Flair was later shown during the tag team match that saw The Street Profits retain the SmackDown Tag Team Titles over Robert Roode and Dolph Ziggler by DQ. The Nature Boy has been linked to Montez Ford and Angelo Dawkins in several segments and commercials this year. Mark Henry was shown at the beginning of the main event between Braun Strowman and WWE Universal Champion Roman Reigns, along with FOX Sports on-air talent Rob Stone. It looks like Keith Lee also appeared in the ThunderDome crowd to scout Strowman ahead of their RAW match on Monday’s season premiere episode, but he was not acknowledged on commentary.

The biggest name in the crowd was also shown during the main event – Bill Goldberg. As noted earlier in the day, Goldberg, who still has matches left on his WWE contract, took to Instagram and indicated that he wanted a shot at the winner of the main event, which was Reigns.

Keith Lee and Mark Henry are in the Thunderdome!#WWEThunderdome #Smackdown pic.twitter.com/OJuyGbVUYt