– There were late swings in the betting odds for WrestleMania 31 tonight and WWE World Heavyweight Champion Brock Lesnar is now a -210 favorite to defeat Roman Reigns, who is at +160.

The Undertaker is now a favorite at -2000 to defeat Bray Wyatt. 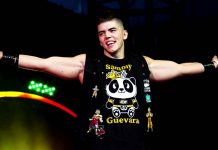