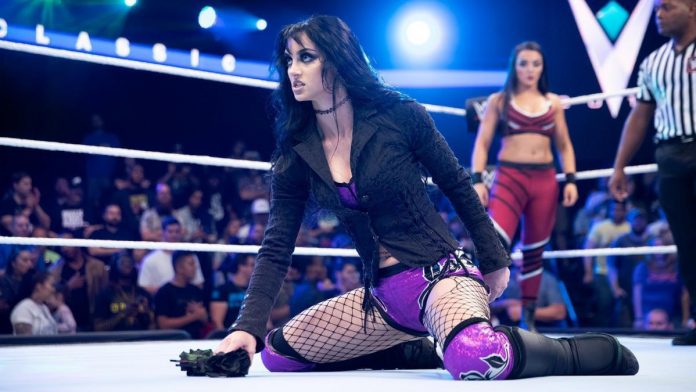 Thanks to The Shining Wizards for passing along the following interview recap with Priscilla Kelly who spoke about the controversial “bloody tampon” spot:

On the attention she’s been getting over the tampon spot: “I’m not new to the attention. I did a tv show when I was 14 (My Big Fat American Gypsy Wedding), and I received tons of attention and backlash from, and everything in between from that, so I’m kind of preconditioned to this kind of thing. Obviously, this is on a bigger scale than that was, but still kind of the same context.

Where did the idea come from? It’s not even about ‘Ooh, I want to shock the world.’ I literally just thought it would be funny, and I’ve had the idea for months now. I’ve just been waiting for the right opportunity to use it.”

On whether she was expecting the negative response within wrestling: “Not at all. I’ve spoken in previous interviews where I said that when you do these types of shows, you don’t know going into it if there are going to be cameras. You don’t know if it’s going to be posted. You don’t know going into these shows, like what to expect, because there are a lot of bar shows that I’ve done that never see the light of day. So, I didn’t expect anything out of it honestly.”

On “The Road Dogg” Brian James’ response: “I mean, we get a lot of people saying a lot of things- good, bad, negative, or whatever. I expected to be called disgusting or gross. I wouldn’t have done it if it wouldn’t provoke that kind emotion. But I never think it’s ok to attack someone personally, to attack their character, or to attack them as a human being. I think that’s never ok, no matter the situation. I think if you want to make a comment on your opinion about it being gross, or disgusting, that’s fine. But don’t attack me as a person when you don’t know who I am. He did apologize, and I appreciate that. But I think, ya know, it takes five seconds to look at your tweet before you send it and say ‘Hmm, is this kind of cruel? Am I attacking her on a personal level?’ And if that’s the case, maybe you should just keep your mouth shut.”

On whether she’s worried the spot could cost her a future job with WWE: “Honestly, no. I don’t think it blew any chance. I mean, if it did, there’s plenty of other opportunity in the world of professional wrestling for me. There’s plenty of other ways to make money in this business. Would I like to go to WWE? Yeah, I’d love to go to WWE. I’d like to go anywhere. I like making money. I like expanding my horizons. I like showing off my work on very large platforms. But at the same time, no, I don’t think it really could have harmed me because I think there’s a lot worse things that have happened. Not only on TV, but I think there are a lot worse things that have happened privately in wrestlers’ lives. These things are very public, and I think what I did, it’s simply a stunt at the end of the day. There’s no cruelty behind my actions, and I think that is the most important aspect.”