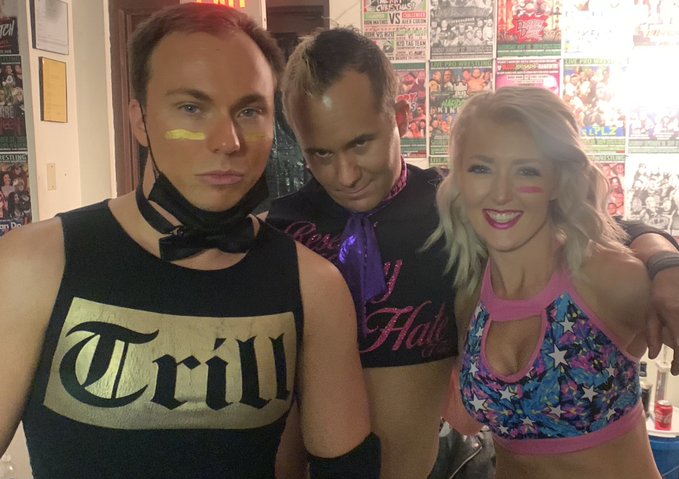 Professional wrestlers are known for their willingness to risk it all for the glory of sports entertainment. A flying elbow drop or a dive onto an unsuspecting foe are staples of the sport. However, this weekend, a trio of a few of the top grapplers on the independent circuit will take a different type of plunge before they dive into the ring later the same day to keep up with their busy wrestling schedule.

Calvin Couture and Tyler Klein, an accomplished tag team known as “The Runway” for their fashion and style in the squared circle, will be joined by stellar women’s star Ray Lyn to participate in Pittsburgh’s Polar Plunge, a fundraiser for local Special Olympic organizations. The event is set to take place this Saturday at Heniz Field, the venue that hosts Steelers games, and will feature volunteers jumping into icy pools in the peak of winter for a good cause. Dubbed “Freezin for a Reason,” the dive into the chilly waters is a relatively easy task for these tough wrestling grapplers that each consider the Special Olympics a very worthwhile cause for the special athletes that get a chance to display their skills through the organization’s efforts.

“I volunteered with Special Olympics all four years when the games took place at my university so the cause is special to me,” said Calvin Couture.

“I love sports and being active and the special Olympics really gives that ability and spot light to these amazing athletes. To help in anyway I can always makes me feel great. All through college I was always really involved with being part of doing something fun and exciting to raise money. Doing an event like Dance Marathon back then was so munch fun. And while I do prefer a nice warm beach I can for sure handle that ice cold water like I handle opponents in the ring and the three of us already have some stellar swim suits picked out just wait,” added Tyler Klein.

Known as one of the best tag teams in Pittsburgh, an area with an extensive wrestling history, Couture and Klein bring their fashion sense inside the ring ropes to mesh with their solid mat skills to be one of the most entertaining acts in the steel city. It’s not uncommon for the duo to zigzag across the western Pennsylvania scene and into other states nearly every weekend as their calendar stays full of opportunities because of their well-rounded ability.

“The Runway have entertained crowds with their style and attitude, along with their wrestling ability since teaming together. They are definitely a team on the rise, said Don Halliwell, an accomplished pro wrestling writer and one of the most knowledgeable fans of the independent scene. Many of the circuit’s top stars see their face at several events as they cover the happenings of the indys.

Despite the dive in literally freezing weather this Saturday, something that is quite unusual for most, The Runway will still be following a common schedule when they are set to perform at Wrestle Pit, an all-star card that will take place in the steel city later that night.

Joining the fashion tag team will be Ray Lyn, one of the most accomplished women’s wrestlers in the sport today. Lyn, sometimes known for her twerk skills, has wrestled for nearly every major organization in the industry today and her wrestling ability has taken her quite literally across the country. Ray Lyn also pledged to take the polar plunge with her wrestling pals because she knows how much the funds raised will help other athletes showcase their skills in their chosen sport. Very similar to The Runway, Ray Lyn keeps a busy calendar with wrestling opportunities and will also appear at the Wrestle Pit event just hours after the icy dive into the freezing water.

“I thinks it’s really cool that I’m able to use my social media for good to help raise money for the athletes in the special Olympics. Also, I’m excited to be taking the plunge with two of my best friends,” said Lyn.

This Saturday I will be joining The runway for the Pittsburgh polar plunge proceeds goto the @SpecialOlympics ❤️ then you can catch us that night @WrestlePit on @FiteTV!
To donate to the plunge click link 👇 https://t.co/qG9gOXBEkU pic.twitter.com/cQEefNkmyx


“Rachael is one of the top women’s stars on the independent scene today, whether it is in singles matches or in the tag team Blonde Force Trama, she will be fighting hard and talking trash the whole time,” commented Halliwell.

Professional wrestling is one of the most unique and diverse forms of entertainment and thus has a varied of opinions on almost every aspect of the sport. However, despite the arguments on social media about the industry’s free agents or star-ratings, everyone can agree that the special Olympics is a great cause for the athletes.

You can donate to the Special Olympics
https://give.specialolympicspa.org/fundraiser/3695966