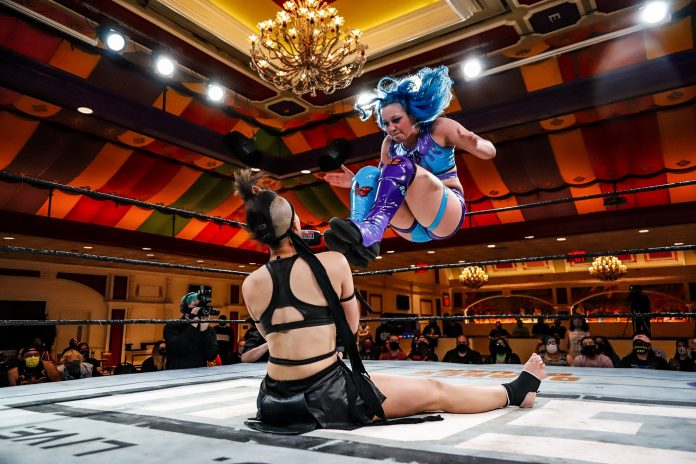 Prodigy-a person, especially a young one, endowed with exceptional qualities or abilities.

The concept of second generation stars in professional wrestling is a common theme, especially when you take into account the once-secretive nature of the industry that protected the dealings behind the curtain with a mafia-like code of silence, it’s natural that some might want to pursue the family business. The wild man, Terry Funk brought a level of intensity to the ring that overshadowed even James Caan’s fiery portrayal of Sunny Corleone. Of course, there are other examples of family ties in sports entertainment like Erik Watts, who was more like Fredo.

Still, despite the extensive history of family in sports entertainment, there are only a select few pro wrestling prodigies, those that excel in the squared circle at such a young age that it seems they are true naturals at the grappling arts. Tom Billington was just 16 when he arrived at the infamous “Snake Pit” in Wegan, England, where he learned the craft under the no-nonsense Ted Betley. The following year, barely old enough to drive, The Dynamite Kid appeared on World of Sport, the country’s vastly popular television program. Before he became a worldwide icon that transcended any perceived cultural boundaries, Rey Mysterio Jr. heard the reaction of Tijuana crowds as he performed dazzling aerial maneuvers at 15 years old.

Last month in Tampa, FL, during the biggest wrestling weekend of the prior year, another pro wrestling prodigy might’ve emerged on the scene during the slew of independent shows that were brought to the area to surround the Wrestlemania event that was held at Raymond James Stadium.

Billie Starkz stands out almost immediately with her bright blue hair and then her skills in the ring let those in attendance know that she’s a wrestler to watch. What might be more impressive than her ability inside the ring ropes is that she’s already this polished at the age of just 16. Showing a poise and mat acumen well beyond her years, Starkz went toe-to-toe with some of the most well-known stars of the indy circuit today, impressing the crowd, as well as her peers.

But, different from most teenagers, Billie followed some family instruction on the path that led her to the ring.

Her father Robert, affectionately known as “Mouse” in wrestling circles, had a habit of watching a combination of Law & Order, CSI, and pro wrestling. Billie jumped onto the couch with him to watch the myriad of crime, forensic science, and in-ring mayhem, which sparked her enthusiasm for the sport.

“My dad introduced me to wrestling when I was little and I just fell in love with it, and decided that’s what I wanted to do for my career,” she explained.

Just over five years ago, Robert’s decision to snap pictures at live shows indirectly started a ripple effect that would eventually take his daughter between the ring ropes.


“I was just a fan who purchased a cheap camera and gave it a shot. As I started getting better, I upgraded cameras and equipment. People started to request me to shoot,” Robert remarked.

A native of New Albany, Indiana, a region known for its history of independent wrestling, Robert took his impressionable daughter to the matches while he attempted to catch the perfect frame of the in-ring spectacle. Billie had watched larger-than-life personas beamed through the TV screen before, but the live experience from the front row took her fandom to another level. As she sat in the ringside seat, she visualized herself bursting through to curtain, greeted by a crowd of rowdy fans. In one of those “only in professional wrestling” scenarios, a surprising duo provided Billie with an introduction to the canvas.

“I was at a Girl Fight show and wanted the promoter, Mad Man Pondo to train me, and he introduced me to 2 Tuff Tony, who had a school. I was given the opportunity to go to a training class and check it out and I never left,” she said.

Mad Man Pondo, a legendary hardcore grappler that achieved cult favorite status for his wild persona and unquestionable passion for the industry, has spent decades in the business. In that time, some of his gruesome resume included an incident where his arm was sliced open with a pair of scissors, as well as international exposure when he crashed through light tubes as a regular on the Big Japan roster in the mid-2000s. Tony, as his name implies, regularly competed with barbed wire and was willing to swing any weapon he could get his hands on to defeat his foes. The pair bled buckets and have a road map of scar tissue on their forehead as a reminder of those dangerous bouts. Still, that didn’t phase the 13-year-old Billie, who wanted more than anything to climb into the squared circle.

“Training at a such young age really wasn’t any different then doing any other sport as a kid. It was hard at times, but I love it so I continued doing it,” she said.

Eventually, she settled in at the Grind House Pro Wrestling Academy, where she completed the tedious process to land on the mat in the safest way possible. Some 13-year-old girls might want to learn how to use their first make up pallet, but Billie couldn’t wait to master arm drags.

Finally, in late-2018 at 14, Billie stepped into the ring for her first pro bout, and has spent the past two years thrilling audiences with maneuvers they just don’t expect from such a young athlete. As unique as her status is as one of the youngest to compete on many independent cards, it also has its own unique set of challenges. Robert, with his camera in tow and his eyes on the road, navigates the interstate as he’s onto his next wrestling photography gig to shoot the matches on the same cards that Billie is scheduled to compete. While her dad is at the wheel, it’s not uncommon for Billie to finish math homework in the backseat, but with the support of her family, she balances her scholastic and suplex efforts.

We on our way AC…


“The help from my family, teachers, and friends. I have a very organized schedule for school, wrestling, and life. I like to be busy,” she said.

As the family duo zigzag their way across the mid-west on any given weekend for Billie’s scheduled matches, her profile become more well-known on the indy circuit, while “Mouse” Starkz continues his work as one of the premiere photographers on the scene, his shots prominently featured on social media. But, those trips are more than just film and flying head scissors, it provides the family a chance to spend time together for a shared passion. Still training and attending seminars as often as she can, Billie cited not only the lessons on the mat, but also traits that go beyond the ring from her time in the sports that she gets to spend with her family.

“Just being a good person and put in the work, that’s what I think is the most important thing I’ve learned from wrestling,” she commented.

While Tampa, FL might’ve been the biggest stage for Billie in her evolving career, she considered it a personal achievement as well for the chance to work with some of her favorite wrestlers, while her dad was at ringside with her camera to capture the action.

“Being able to wrestle Mania week in Tampa and getting to wrestle people like Kylie Rae, Su Yung, Jake Something, Gary Jay, and Allie Kat. All people I’ve looked up to. I know he’s there if I need him and it’s great knowing how much he supports me,” she said.

“When I’m shooting her matches I’m a mix of terrified, proud, and also evaluating. She gets multiple conversations regarding her matches from me,” Robert added.

While it remains to be seen just how far Billie Starkz goes within the ranks of professional wrestling remains to be seen. However, the skills she already showed during the early potion of her career would suggest that it’s a safe best that Tampa won’t be the only time a major audience sees her step into the squared circle. A combination of family, dedication and athleticism put the 16-year-old on the radar with some of her wrestling idols, which allowed her to learn the craft from them. So, the story of Billie Starkz has yet to truly be written, but she certainly has a unique chapter already in the books for the introduction to the sport.