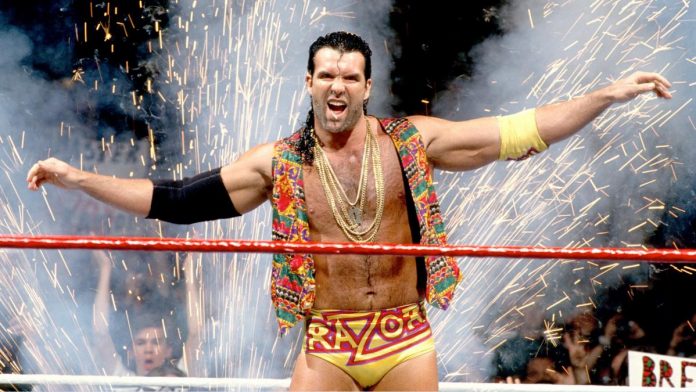 Before Razor Ramon (aka Scott Hall) made his WWE television in-ring debut in August 1992, he was working dark matches at television tapings.

Last week, 34 episodes of WWF Superstars from 1992 were added to the WWE Network. This week’s “WWE Hidden Gems” are two dark matches from Superstars tapings that took place that summer. One features Konnan as Max Moon, and the other features Razor Ramon.

WWE has released a clip of Ramon’s dark match, as he took on “El Matador” Tino Santana on June 29, 1992, at a Superstars television taping in Glens Falls, New York. As you can see below, he wore long tights before permanently settling on trunks.

Ramon went over Santana in a match that lasted about 15 minutes. Hall recalled the match on Twitter, calling it his first-ever performance for WWE.

My first ever in ring performance in WWE #DarkMatch https://t.co/WCHXxPlbob

This actually wasn’t his first-ever match inside a WWE ring as he began working dark matches the month before. WWE’s 2016 documentary on Hall — Living on a Razors Edge: Scott Hall — shows footage of his first-ever match, from May 18, 1992. He came out looking as he did when he was in WCW as The Diamond Studd by wearing a long jacket, pants, and sunglasses to the ring and wrestling in plain black trunks and white boots.

Hall also noted doing a job to Virgil the following night because Vince McMahon wanted to check his attitude before giving him a huge push.

Yep. Did a job for Virgil the next night. Vince checking my attitude before a big push

After weeks of vignettes, Ramon made his televised in-ring debut on the August 8, 1992, episode of Superstars. He went over enhancement wrestler Paul Van Dale with the Razor’s Edge.

In another bit of trivia, Van Dale is Carmella’s father.