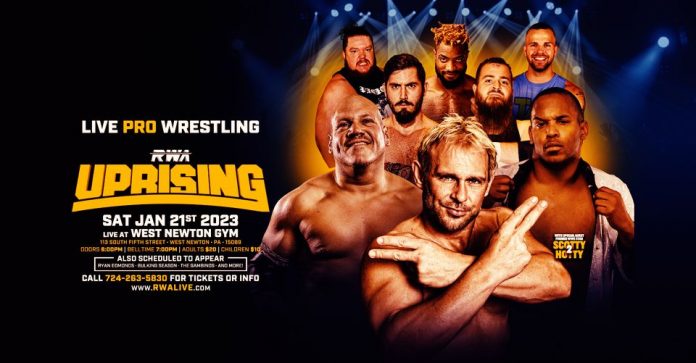 “I thought if I do not live this dream, it will be the one regret in my life” -Derek Widziszewski

The word passion is often used in professional wrestling, both for the emotion that it generates from the fans and for what it takes for those that choose a path in the sport. Without passion, a tenure on the independent circuit would be rather brief. For the in-ring athletes, it’s a tedious process of traveling, sometimes for meager pay and sometimes at sparsely-attended regional events, just for the chance that the right eyes might see them and that might lead to bigger opportunities on the indy scene. The chance to hone their craft is the only assurance they have, there are no guarantees. For promoters, the risks aren’t with wrestling boots, but often with their wallets. Sure, we’ve all heard the horror stories of those “one and done” promoters that draw 15 fans and disappear. It’s passion that allows certain individuals to attempt to bring their vision of professional wrestling to a paying audience that sustains itself in such a way to leave a continuous footprint on the sport that gives the wrestlers a literal canvas to present their art form, and the fans a place to enjoy themselves. Just like there are no guarantees when a wrestler laces up their boots, nothing can be assumed when a promoter puts their money on the line to run an event. The passion to contribute to the genre is what brings so many people from so many different backgrounds together. That passion is what allows all the moving parts to be put into place for the culmination of a live performance.

On the Pittsburgh scene, a place almost as well-known for its wrestling as the steel it once produced, nothing describes the term passion as much as the Renegade Wrestling Alliance.

Founded in 2009, the RWA, a blue collar league that has its home base in West Newton, Pennsylvania, was based on the previously mentioned dream of Derek Widziszewski, who is just as passionate about his product as the fans in attendance. Widziszewski was one of the most familiar faces of Pittsburgh wrestling long before he put on the suit jacket to promote his own cards. Derek was one of the most dedicated attendees of events for several years, and many considered his enthusiasm for the action to be infectious.

Much like the territories of yesteryear and the old school stars that started the fandom that planted the seed of the project, the RWA started on a very grassroots level with local networking and small steps that took what was once a dream, pushing it toward an eventual reality.

“In 2009, I was renting a ring, renting chairs, only had a drape and curtain rod at the wrestler entrance, and even rented sound equipment. Now, we have everything. Our own ring, sound, chairs, ring entrance, lighting, and an incredible talent roster,” Derek said.

In fact, what started as a small scale operation with that little curtain rod, celebrates it’s fourteenth anniversary event this Saturday with a consistently packed house, still at its stomping grounds in West Newton, a location that the RWA made a destination for pro wrestling. Throughout the 14 years of its existence, the promotion hosted some of the best young talent in the area, a myriad of accomplished veterans, established independent stars, and its share of legends.

“I promote heavily, but I am nothing without everyone involved. Every piece of the puzzle has contributed to the evolution. it’s been an amazing journey. The best talent in the region, some of the best talent that has been around the world, on TV, and so many incredible people on ring crew, security, tickets, posters, and film crew,” Widziszewski commented.

“I’ve been with RWA for just a couple months now, but you can feel that there is something special happening in the organization. The fans are second to none in their support and dedication to RWA, which feeds important energy to the wrestlers, referees, announcers, crew, managers, and everyone else involved,” added Quinn Magnum, a former grappler with more than 25 years experience and one of the most respected figures in Pittsburgh that now works as an organizer at RWA.

The success is in the results for the RWA, every month fans pack into the West Newton gym with as much dedication and emotional investment as you’ll find anywhere in the sport. The villains generate a level of animosity not seen often in the modern era of the industry, and the heroes have the fans support as they chase championship glory. A traditional presentation blends with contemporary action to deliver a quality product that offers a little bit of everything to its audience. Derek puts in the groundwork for his product as well, often taking the time to shake the hand of every paying fan as they exit the building after the final bell. Despite the success of 14 years as an organization, he always keeps the humble beginnings of the venture in perspective.

“Derek is a truly active promoter that not only puts in the time and money to promote RWA all over the area, but genuinely cares about anyone who works for him and especially the fans. I have personally seen this man spend two hours after a show has ended to speak to each and every fan as they head out the door. If a new fan came for the first time that night, he would know them by name when they left, I’ve seen that happen too. From a personal perspective, this is a whole new fresh start for myself that has breathed life back into my passion for wrestling as a whole,” commented Quinn Magnum.

The line-up for RWA’s Uprising card this Saturday reflects the importance of the milestone of the anniversary of the company. “The Rev” Ron Hunt, who is known for his appearances in Ring Of Honor and is the current RWA champion, will defend his title against accomplished veteran J-Rocc. A few months ago, J-Rocc hit a pile driver on Hunt on a steel chair, putting the champion’s future in doubt, but the grudge will be settled this weekend. Among the stacked line-up, former WWE star, Scotty Too Hotty will be in the building to changeling the villainous Ryan Edmonds.

“I did not at all think I was going to revolutionize or change the business. I just wanted to put my spin on it, and live a dream. I also enjoy entertaining people and interacting with fans. The wrestlers had to test me, they had to find out for themselves that I was legitimate and not a joke. I had to prove I didn’t just pay for a license and pretend I could do this, I had to earn it. So as our reputation grew, so did our product. Here we are14 years in, and the rewards are a great product we can be proud of that gives the RWA fans 100 percent. I am so proud of our growth,” Derek said enthusiastically.

The fans and the roster are buzzing with excitement ahead of the historic evening this Saturday.

“RWA was my first and original home when I started in this business, I cant express the gratitude and respect I have for everyone. I have met friends, family, and gained other opportunities due to being a part of this company since the beginning. Wherever this business takes me, I will never forget what it has done for me and my career in professional wrestling,” said Mike Daugherty, RWA broadcaster and one of the premiere voices of Pittsburgh.

The Renegade Wrestling Alliance has an extensive and storied history for almost a decade and a half. The organization was built on those that were willing to put in the time and energy to see a vision became a reality. The diehard RWA audience gets a chance to become drawn in by the allure of the in-ring spectacle, a combination of the action and drama of the sport. Even with all of that, one word, passion can sum up the impact that the RWA has on the Pittsburgh wrestling scene.

For more information about the RWA, you can go to https://www.facebook.com/WrestlingRWA