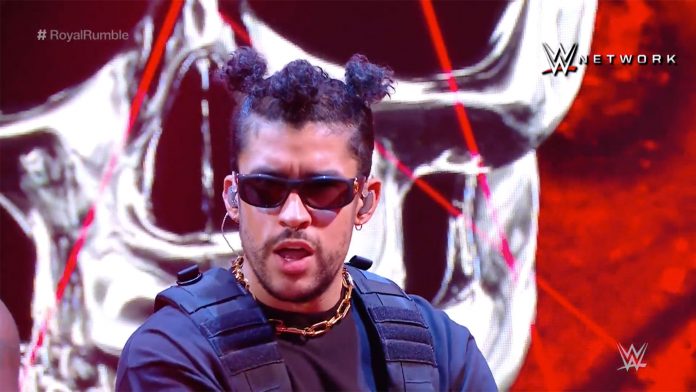 Rapper Bad Bunny is currently scheduled to be in the Royal Rumble Match on Saturday, according to Ringside News.

It’s likely that Bad Bunny will not be at WrestleMania 38 this year, but anything is possible. He’s currently scheduled for a three-night tour-wrapping concert in Miami on April 1, April 2 and April 3, which is WrestleMania Weekend.

It’s likely that this is just a one-off appearance as the rapper is scheduled to begin his 35-stop arena tour on February 9 in Denver. The tour quickly sold out last April, due to a push from his WWE run, and broke Ticketmaster’s record for most tickets sold on its first day of sales, and also crashed their system. WWE promoted the tour on this week’s RAW episode. Due to the quick sellout of the tour beginning in February, Bunny just announced a 29-stop stadium tour that will begin on August 5 in Orlando, and wrap in December with stops in Latin America.

After performing at the WWE Royal Rumble in 2021, Bunny began a program that led to he and current WWE United States Champion Damian Priest defeating John Morrison and The Miz at WrestleMania 37. Bunny also became a one-time WWE 24/7 Champion in February, capturing the title from R-Truth, but then relinquishing it back to him later on.