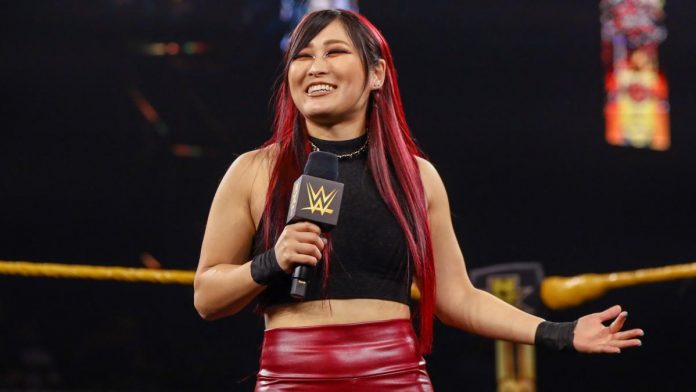 “The Genius of the Sky” is likely headed back to “The Last of the Rising Sun.”

Dave Meltzer reported in the latest issue of his Wrestling Observer Newsletter at F4WOnline.com that Io Shirai could be on her way out of WWE imminently.

Shirai has not put pen-to-paper on a new contract offer from WWE, and will see her outstanding deal with the company expire in August, effectively making her a free agent.

According to the report, the women’s wrestling star has apparently informed people in Japan that she plans to return to her home country to be closer to her family upon the expiration of her WWE contract next month.

When in a similar situation in 2020, Kairi Sane returned to Japan midway through her existing WWE contract with the condition that she serve as an Ambassador for the brand in her home country overseas.

Unlike Sane, Shirai will be free-and-clear of all contractual obligations to WWE when her deal expires in August.

Nearly two-years after the expiration of her final match inside the squared circle for WWE, Kairi Sane joined the World Wonder Ring Stardom promotion in Japan.

While there are reportedly no expectations from Stardom for “The Genius of the Sky” to return to her old promotional stomping grounds, she would be able to from a legal standpoint as soon as next month, unless she reaches an extension on her current deal with WWE.

Whether or not Io Shirai has any interest in a potential run in All Elite Wrestling, IMPACT Wrestling or any other pro wrestling promotion remains to be seen.

Shirai initially signed with WWE in May 2017 after a seven-year run in the aforementioned Stardom promotion in Japan.

She last appeared inside the ring for WWE at the NXT Stand & Deliver 2022 special event back in April, losing in a NXT Women’s Championship 4-Way showdown that Mandy Rose emerged victorious in, which also included Cora Jade and Kay Lee Ray.

We will keep you posted here at PWMania.com as updates regarding the WWE and NXT status of Io Shirai continues to surface.