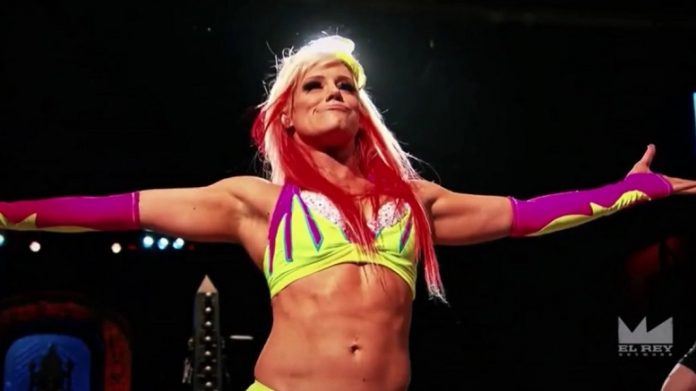 Former Knockouts Champion Taya Valkyrie has finished up with Impact Wrestling. Tonight’s Impact on AXS episode featured an angle to write Valkyrie out of the company. PWInsider reports that Valkyrie’s two year deal rolled over for an additional year in late 2019, and that third year just expired.

Tonight’s Impact saw Valkyrie reveal that she was the one who previously shot John E. Bravo at the recent Bravo – Rosemary wedding. The storyline was that Valkyrie shot Bravo to protect her friend Rosemary from marrying him, not realizing that Rosemary was using Bravo to get his “virgin blood” to use as she is a demon. Tommy Dreamer had Valkyrie taken off to jail, and joked that if she’s lucky she will go to Jacksonville State Prison (AEW) but if she’s not lucky, and for what she did, he thinks she’ll end up at Stamford Correctional (WWE) for two years with an option for a third, which he joked will change a person’s soul forever. Acey Romero joked that he hopes she doesn’t end up in Baltimore (ROH). You can see video from both of the Valkyrie segments below.

Taya, who is married to WWE RAW Superstar John Morrison, debuted with Impact in 2017 and is the longest-reigning Knockouts Champion in company history as her first and only reign went for 377 days. She lost to Knockouts Champion Deonna Purrazzo at Saturday’s Hard To Kill pay-per-view, just days after she lost to Kimber Lee on the go-home Impact show.

Valkyrie commented on the departure after tonight’s segments and wrote, “I’m not crying, you’re crying” There is no word yet on what the future holds for the 37 year old Valkyrie, but we will keep you updated. There have been rumors on Valkyrie joining her husband in WWE, but nothing has been confirmed.

She FRAMED @legendoflarryd and is going to jail. #IMPACTonAXSTV pic.twitter.com/RK5YOTvTbM