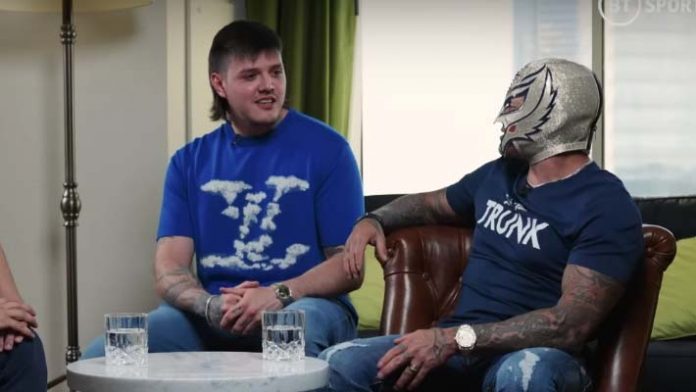 The WWE Universe was almost witness to a showdown between a father and son.

As #MonthOfMysterio continues to celebrate the 20-year anniversary of Rey Mysterio in WWE, the masked Mexican wrestling legend, as well as his son Dominik Mysterio, sat down with MMA journalist Ariel Helwani for an in-depth interview for BT Sport.

Featured below are some of the highlights from the one-on-one sit-down interview between Ariel Helwani and The Mysterio’s where they touch on nixed plans for them to enter into a rivalry against each other in WWE.

Rey Mysterio on talks behind-the-scenes in WWE about he and Dominik entering into a potential rivalry: “We actually talked about that during his first couple of weeks of training. I remember sitting down with him, and telling him … ‘Could you imagine if you started working and then we teamed up and eventually, you know, whether I turned on you or you turned on me?’ Yeah, that would be cool.”

On their connection being so strong that they decided to remain a team rather than fight each other: “Over time, it’s like, I don’t think we can do that. Our connection has been so tight, you know, from day one, the age of seven, and Eddie Guerrero and myself. I don’t think that it would be — storyline-wise, it might be attractive, but I need to feel it at the moment, during that time. Right now, I feel like we just, we have a really tight bond, but it would be something special.”

Dominik Mysterio on the spot he is in with WWE today: “Where I am now, I would’ve never in a million years thought, you know, two years in I’d be former Smackdown Tag Team Champion with my dad … No, [I’d] never [turn on him].”

Watch the complete 29-plus minute interview with Rey Mysterio from BT Sport via the video embedded below courtesy of the official YouTube channel of the digital media outlet. H/T to WrestlingInc.com for transcribing the above quotes.