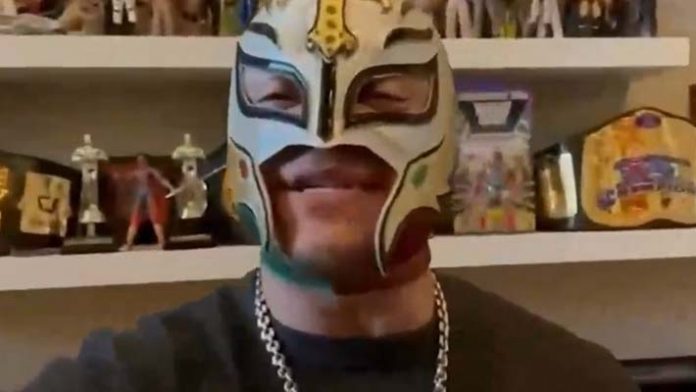 Saturday night at the AAA TripleMania event in Mexico City, WWE superstar Rey Mysterio opened the show with a video message congratulating the promotion on its 30th anniversary of TripleMania.

“Good evening to you all! It’s your friend Rey Mysterio and I want to start by giving an affectionate hug to everyone that is present tonight and had the time to come to this magnum event of TripleMania,” Mysterio said. “I hope y’all have a wonderful time! It was a great honor being a part of the AAA Family and being a part of the first TripleMania in 1993. I want to congratulate all the wrestlers participating tonight & to the company for all your effort and work in making 30 years of successful TripleManias. Wishing you all have a ball tonight, blessings to all, and Viva Mi Raza!”

Mysterio participated in the very first TripleMania event in 1993 as he teamed with Volador and Misteriso as they defeated Tony Arce, Vulcano, and Rocco Valente.

Back in July, Mysterio celebrated the 20th anniversary of his WWE debut which occurred on SmackDown in 2002.

Rey Mysterio thanked all the fans for being there in the 30th anniversary celebration of TripleMania.#TripleManiaXXXpic.twitter.com/B9Ku9ndizU

(H/T and Transcribed by Fightful)