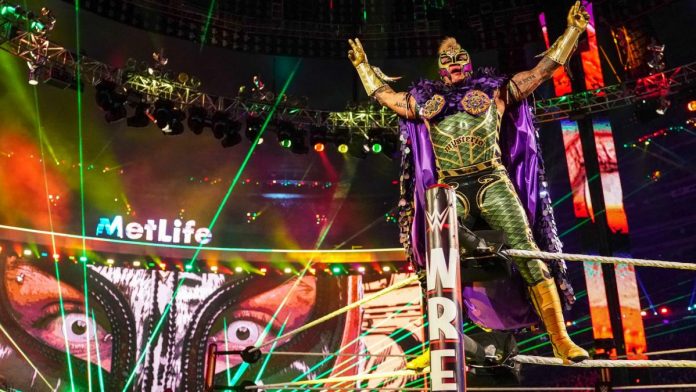 In an interview with TVInsider.com, Rey Mysterio discussed having one more match against Andrade:

“I think the goal right now — after tonight’s outcome in the Andrade ladder match — I think something along the ways that if he wants to keep feuding and going a step further, I’m willing to put my mask on the line versus his hair for a WrestleMania moment. Whatever the case might be, whoever ends up winning, I think it would be a huge stepping stone for either of us. As far as moments, I really would love to relive a Royal Rumble moment, being that I hold the record right now for having the longest time in a Rumble match. These moments stick in my mind and heart. You always want to become better than you were yesterday.”

“I think the one piece of advice that I can offer to them is something they already know. That is to go out, put out a great show and represent your traditional style lucha. For us it’s lucha libre, we never forget our roots. That’s something Lucha House Party has. Cain, although he is very new to this world of wrestling. He understands and values the lucha libre style and already is adapting his own style with the lucha libre. Overall, we definitely want to see lucha libre grow more with the amount of days, months, years I have left. You also have Angel Garza, who is up-and-coming. There is going to be bigger and better opportunities just like there were for my WWE years. There is something good to expect within WWE for the fans to be more involved in lucha libre.”